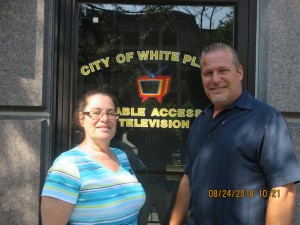 The Service Employees International Union 32BJ announced on White Plains TV Friday the union and  Integrated Building Management have agreed to bring back all previous SEIU dismissed workers to the cleaning service.   Integrated had let them go for being members of the union, who were paid at a higher wage scale.

Lenore Friedlaender, Assistant to the President at 32BJ SEIU, announced the mutual agreement on the timely WPTV program People to Be Heard, Friday morning in the WPCNR studios, when discussing the value and effect of class action suits of the U.S.Supreme Court approval of limiting actions against employers to arbitration only.

She said the suit filed by the SEIU 32bj against Integrated Building Management/Greenway Maintenance  had not had a decision yet in suits filed with the National Labor Relations Board and NY Supreme Court.

She announced  the parties had mutually negotiated a settlement bringing all 7 SEIU workers who had been dismissed back to work with the new cleaning service Integrated Building Management.

The owners of the building, Caspi Development and the new cleaning contractor (Integrated) have agreed to hire back the SEIU “7”  with a series of step increases on a PAY schedule that would restore them to full union pay and benefits (working out a compromise).

The SEIU suit(s) had been filed in April  by the union charging violation of the Westchester County Displaced Workers law by Integrated Building Management which dismissed 7 SEIU union workers when it took over maintenance of 234-245 Main Street.

The Westchester County Displaced Workers Law  guarantees that workers cannot lose their jobs due to a change in building management.

County Executive George Latimer wrote a letter to the President of Caspi Development urging Caspi “do the right thing” and rehire the workers. The new cleaning contractor, Integrated Building Management told the union it would rehire all seven workers.

MaryJane Shimksy in May,  told WPCNR, Westchester County could not sue Caspi Development owners of the 235-245 Main Street White Plains or IBM/Greenway (Caspi new private maintenance contractor) because the law specifically provides only a private right to sue to enforce the law.

According to an SEIU spokesperson Frank Soults, the seven workers were made an offer to bring back the 7 dismissed rehired at minimum wage instead of the contractual union rate, and offered none of their previous benefits.

Soults said four of the seven workers took back their jobs because they needed the money. 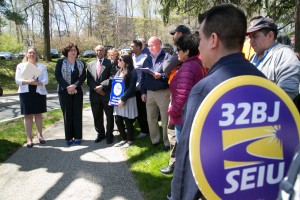 Several county legislators protested the nature of the offer as a violation of the Displaced Workers Act back in May.

Since then, the union and Integrated Building Management have negotiated a solution, Friedlaender said. Integrated brings back all seven workers on an arrangement where graduated increases on the pay schedule would bring all seven back up to their previous union wages.

The program People to Be Heard, with John Bailey and Peter Katz, recorded yesterday discusses opening negotiations with The Building and Realty Institute of Westchester  and  Mid-Hudson Region, Inc. will be telecast countywide on FIOS channel 45 and in White Plains Altice Ch. 76, on Thursday, August 30 at 8 PM and Saturday, Labor Day Weekend at 7 PM. It is also internetcast  around the world on www.wpcommunitymedia.org, www.whiteplainsweek.com  and YouTube beginning  Friday August 31.