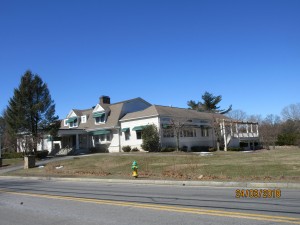 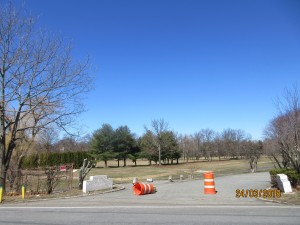 Future entrance to the school: Hathaway Lane, adjacent to the  abandoned clubhouse. New school facilities will be built on former fairways extending into the distance. Photo from WPCNR archive

The August 24th Court decision comes after seven years of reviews by the City and  lawsuits by the Gedney Association.

Since acquiring the Ridgeway Country Club property in January of 2011, FASNY followed all environmental reviews and made multiple revisions of its plan in order to address community concerns, including substantially reducing the scope of the project and adopting a comprehensive traffic management plan.

Based upon a prior successful legal challenge by FASNY, the City and FASNY entered into a Stipulation of Settlement in 2016, in which FASNY filed a reduced Upper School only plan for no more than 640 students that limited all construction to one parcel of the former Ridgeway site.

After a year of further review, in November 2017, the City Council approved FASNY’s revised application, and the Gedney Association and various of its supporters brought two separate legal challenges against the City Council and FASNY.

In a 26-page opinion, Judge Lefkowitz rejected the plaintiffs’ initial argument that the former Ridgeway Country Club could not be used for an educational institution because of a Covenant filed in 1925, prohibiting the use of the property for “any institution, other than a club.”

The Court held that while the 1925 Covenant “unequivocally prohibits many uses […] it contains no like prohibition of any use related to education.”

The Court rejected arguments that the 1925 Covenant’s prohibition of “noxious” uses applied to a school, noting that under New York law, in fact, “such uses are presumed to have a beneficial effect on the community in which they are located,” and that the “law has long favored free and unencumbered use of real property. ”

The Court also summarily rejected various arguments made challenging the Council’s review, finding that “[t]he Record establishes that the Common Council did take the requisite hard look at all of the potential impacts” related to the school.

The Court specifically rejected the Gedney Association’s and its supporters’ contention that the Council failed to consider traffic issues raised by the challengers’ consultant, noting that, under the controlling law, the reviewing agency “has discretion to choose between conflicting experts,” and that various of the plaintiffs’ claims were no more than “rank speculation based on hypothetical circumstances.”

“We are gratified that the Court appreciated the tremendous efforts that both we and the City of White Plains went through to make sure that our project is good for FASNY and for the community as a whole,” said Emmanuèle Vinciguerra, Chair of the FASNY Board of Trustees.

She went on to say, “FASNY would like to extend special thanks to all the members of the White Plains community who have supported us throughout these years, as well as, again, extend an open hand to those residents who had concerns about the project.”

Vinciguerra noted that “FASNY had already recorded a 51-acre publicly accessible conservancy on its property, and looks forward to sharing this incredible open space with its neighbors and other members of the White Plains community.”

FASNY’s counsel, Michael Zarin of Zarin and Steinmetz, added:  “Judge Lefkowitz’s decision confirms that the Courts will sustain environmental reviews that are the product of a careful and comprehensive review of the issues.  FASNY has demonstrated great commitment to its constituents and to the larger community, and we are very proud to have been part of this long journey.”