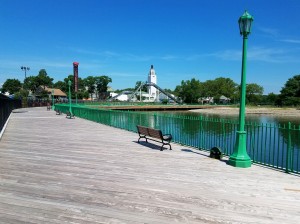 WPCNR PLAYLAND GO ROUND. From the Westchester County Department of Communications. July 4, 2018:

Visitors today to Playland Park in Rye will once again enjoy magnificent views of Long Island Sound from the 700-foot long North Boardwalk, now that a capital replacement project has been completed, Westchester County Executive George Latimer announced today during a ribbon-cutting ceremony. 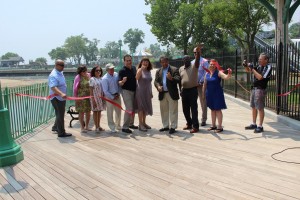 “I am pleased to welcome Westchester residents back to this very special section of Playland Park, which had been closed after Superstorm Sandy demolished the existing boardwalk in 2012,” Latimer said. “It’s been a long time coming, but the way this new Boardwalk is built, it will be here for a very, very long time to come.”

Playland’s shoreline sustained grave damage during Superstorm Sandy on October 29, 2012, with winds and tidal surges greatly damage the South Boardwalk, and completely demolishing and washing away the North Boardwalk.

The replaced boardwalk is built with 500-year storm resistant materials. The Boardwalk has been upgraded with steel piles replacing the former wooden ones, and a concrete substructure and platform to further stand up to the elements.

Like the Park’s South Boardwalk, which was repaired and reopened in 2013, the new boardwalk’s decking is made of Brazilian hardwood known as Ipe, which can last more than 30 years without warping and splintering.

New wrought-iron fencing on both the water’s edge and the park side of the walkway has been installed, along with brand-new, historically correct benches and lighting to comport with the Park’s Art Deco architecture.

The cost of the project was $4.6 million for design and construction.