↓
Home Menu ↓
Home→New 2-Year Teachers Contract Memorandum of Agreement Approved by Board, Now It’s Up to the Teachers Union to Accept it. 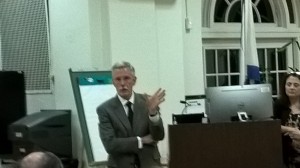 Acting Superintendent of Schools for the White Plains City School District, Dr. Howard Smith confirmed the Board of Education Acceptance of the Memorandum of Agreement on a new two year contract with the White Plains Teachers Association at the School Board last night. WPCNR File Photo

Dr. Howard Smith, Acting Superintendent of Schools for White Plains, in an exclusive statement to WPCNR announced a tentative Memorandum of Agreement for a new 2-year contract with the White Plains Teachers Association, if the Teachers vote to approve the new contract. Smith’s statement:

“The Board approved the contract contingent upon approval by vote of the full Teachers Association membership.  So it would be inappropriate for me to comment until we have received confirmation of ratification by the Association. “

The Memorandum of Agreement is a 2-year contract beginning in 18 days, July 1, 2017. It increases all Step Salary levels 1% and in addition elevates all present teaching staff to the next step level, in their next year.

New teachers beginning July 1st will receive the 1% increase applied across all 20 Step  levels. This raises the salary of a 1st year teacher with a Bachelor of Arts to $56,161 (from $55,605,currently).

Asked if pensions were affected by the advancement in the step status of present staff, Dr. Smith explained to WPCNR they were:

“Pensions are determined by a formula based on years of service at the time of retirement in a position covered by the State Retirement System and an average of highest salaries earned by the retiring teacher during their service.  So a teacher’s future pension will increase as a result of step movement on the salary schedule in 2017-18 representing both another year of service and a higher salary.”

The cost for the portion of payment a family health  plan the teachers are responsible for is $3,458 , s single plan is $1,544, beginning July 1. On July 1, 2018, those costs go up to $3,672 and $1,639. These shares of currently on staff teachers paying the cost of their health insurance are partially and sometimes completely covered by the effects of the automatic step to the next increased step level they will be receiving, a level of salary  they would not have been eligible for until July 1, 2018.

The Memorandum of Agreement if the teacher union members agree to it in their vote next Tuesday, gives them better compensation than if they choose to continue to work under the Triborough Agreement (in lieu of a contract in place).

One example:  if you have a Master of Arts and are eligible for Step 2 salary, under the new Memorandum of agreement you receive $69,702 beginning July 1. If the Triborough plan is opted for (by rejection of the contract proposal), that M.A. would only receive $69,012. On July 1, 2018, that MA now at Step 2, would be more ahead, because they would receive $73,111  compared to $71,671 under the Triborough agreement.

The MA now who would reach Step 4 as July1, 2018 is $2,130 ahead of what they would receive if the Teachers Union votes to turn down the Memorandum of Agreement  The presently on-staff teachers  receive approximately the salary  increase equivalent of one  year more of service under the former contract.