CURRENT STAFF REWARDED WITH RAISES OF 3 TO 5% A YEAR.

MEMORANDUM OF AGREEMENT APPROVED BY BOARD OF EDUCATION

The White Plains City School District and the White Plains Teachers Association have come to a Memorandum of Agreement rewarding current members of teaching staff with approximate raises of 3 to 5% over the next two years, and raising new teacher hires salaries 1%.

The Board of Education approved the memorandum of agreement Monday evening, June 12. The teachers will on whether or not to accept the contract June 20.

It is an interesting new contract,  according to the memorandum of agreement— based on White Plains Teachers Association documents:

A Step is the level of salary taking into consideration a teacher’s present educational degree and number of years served in the district.

Under the proposed new contract that first year salary (Step 1) for a new teacher with an MA hired by the district for the 2017-18 academic year would increase 1% to $64,630.

Each of the 20 Step pay levels are increased across all degree levels and years with the district. Each Step Level would increase 1%.

The effect —  this allows the district going ahead to hire replacement teachers new in their first year to the district at only 1%  salary increases going forward at all academic degree levels. This is a significant saving.

For teachers on staff already, it is a different story:

Under the new Memorandum of Agreement all current teachers are automatically increased one Step effective July 1, and another Step on July 1, 2018. This automatically adds two more years of service (and its commensurate step pay)  when you have only worked for the district one more year.

In the 2nd year of the contract present staff  automatically get a raise to their next step in sequence. The effect: Present teachers gain two years in longevity and degree pay for their next two years.

Here’s how this works to the staff teacher’s advantage: If you are completing your 2nd year this month as an MA teacher with the district,  you will automatically move to Step 3 reflecting 3 years experience instead of the two you have just completed, but you are not actually skipping a level, but you are moving to a higher level of pay than you would have gotten under the old contract that increases your pay more than 1% because you are at a higher level of pay presently than a new teacher in their first year with the district:

(WPCNR would like to clarify that teachers on staff are not skipping a step to a higher level, but rather moving up to a new higher step in sequence.)

The contract salary increases generated by the automatic increase to the next Step level should the teachers approve the contract  (if the Board approves it at Monday’s meeting) guarantee the White Plains new Superintendent of Schools, Dr. Joseph Ricca, at least a year and a half of labor peace with his teachers as he settles into the school district.

The contract negotiations with the district began March 28 and after 5 subsequent meetings, agreement was reached May 30.

There are changes in work schedules also included in the new contract.

These are the proposed new pay schedules with the last year of the old Step Schedule so you can figure out the pay increases  generated by the increased 1% in the Step levels and the automatic advancement to the next step for onstaff teachers the next two years: 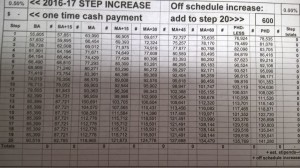 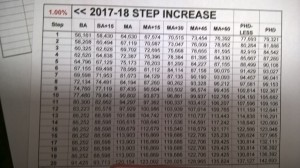 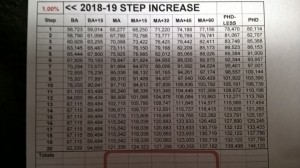 These charts may be viewed at www.wptaonline.org