At last night’s Board of Legislators meeting, the Immigration Protection Act authored by Majority Leader Catherine Borgia (D-Ossining) and introduced by the Democratic Caucus passed its first test on the path to becoming law. Numerous members of the public came to the Board to publicly comment on their support for the Act and expressed hope that Legislators would do the same. The Act was referred to the Committees on Budget & Appropriations, Legislation, and Public Safety & Social Services.

“This was the first step in passing this Act to ensure the humane treatment and safety of all Westchester residents becomes the law of the County,” said Majority Leader Borgia. “With all the news reports of immigration raids, even in New York, this Act is a step we must take to follow the law and make sure our County does not practice any type of discrimination. I thank Legislator Virginia Perez for her action to co-sponsor this bill; her voice is a welcome and needed one to help shepherd this bill to passage,” added Borgia. 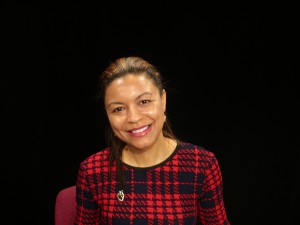 Also during last night’s meeting, Legislator Perez (above), the Board’s sole Latina legislator, added her name to the Act, bringing the total number of sponsors to eight. Nine votes are needed to pass the Immigration Protection Act. It will require twelve to protect against any potential veto from the County Executive.

“As a non-English speaking Latina who came to the United States from the Dominican Republic at an early age, I have a unique perspective on the Immigration issue.  To target a group of people based on an assumption of their legal status is bigoted, dangerous, unfair and a direct violation of their human rights. This Country was founded by immigrants, was built by immigrants, and will realize its future greatness with contributions from immigrants.  That’s why I am co-sponsoring the ‘Immigrant Protection Act’,” said Legislator Virginia Perez (D-Yonkers).

“We will not tolerate discrimination in Westchester County. Not against anyone, not for any reason. What we are aiming to do with this legislation is ensure that we are not perpetrators of discrimination while staying within the law,” said Legislator Alfreda Williams (D-Greenburgh). “Westchester County will not assist in creating a registry, we will not assist in unlawful traffic stops which lead to unjust detentions, and we will make sure everyone is represented fairly in our justice system. It is on us to make sure our County departments follow these American ideals,” concluded Williams.