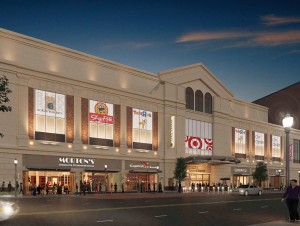 Morton’s SteakHouse is moving in to the City Center on Mamaroneck Avenue. Rendering, courtesy, RHYS

RHYS, a Stamford-based commercial real estate firm, announced Tuesday that Morton’s Steakhouse in White Plains is moving from its current location at 9 Maple Avenue to the City Center Development in downtown White Plains.

The new 8,000 square foot restaurant is taking over the space at 5 Mamaroneck Avenue, once home to the Legal Seafood Restaurant which closed at the end  of 2013. The new Morton’s is expected to open in the summer.

City Center is a 600,000 square foot development in downtown White Plains consisting of retail, restaurant and entertainment space and is located at the corner of Mamaroneck Avenue and Main Street.

The landlord, Kite Realty, recently completed substantial renovations to the building that include façade work, new escalators, opening of commons areas to create better access, way signs and the addition of a valet line for restaurant users.

“Morton’s will be a welcome addition as a new vision for City Center continues to be ushered in,” said RHYS Executive Vice President & Principal Jason Wuchiski. “They will enjoy a prominent presence right in the middle of the city and will no doubt take advantage of the many new features the building offers, most notably the valet.”