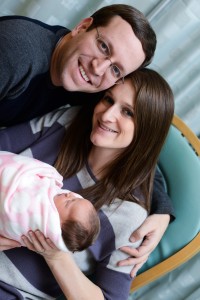 New York State Assemblyman David Buchwald and Lara Buchwald of White Plains are proud to announce the birth of their first child, Anna Rose Buchwald.
Anna was due on April 15, 2015, but she had other ideas and arrived on March 16, 2015, weighing 6 pounds, 2 ounces. Anna stayed in the neonatal intensive care unit at White Plains Hospital for just over five days. “The professionalism of the nurses and doctors at White Plains Hospital’s NICU could not have been better,” said Assemblyman Buchwald.
Mother and daughter are both doing well, and the whole family is enjoying the start of spring. “The birth of our beautiful, precious daughter makes me even more optimistic about the future,” said David. “When I look at Anna, I can’t help but redouble my efforts on behalf of the environment, education, and women’s equality.”
For the first time in his Assembly career, David missed votes while at the hospital with his wife and daughter. One of those votes was on his own bill to improve New York’s Freedom of Information Law. Nonetheless, the bill passed the State Assembly 147 to 0.
Assemblyman David Buchwald represents the 93rd Assembly District in Westchester County, which includes the towns of Bedford, Harrison, Lewisboro, Mt. Kisco, New Castle, North Castle, North Salem and Pound Ridge as well as half of the City of White Plains.
Lara Samet Buchwald is a litigation associate at the law firm of Davis Polk & Wardwell LLP.