The Gedney Association, representing a neighborhood of 455 families, situated in Gedney Farms, one of the City of White Plains lowest density residential neighborhoods, has filed suit against the Common Council regarding its recent non-unanimous decision to accept the environmental findings pertaining to the French American School of New York’s proposal to build a regional school complex on the environmentally sensitive former Ridgeway Country Club property.

The suit alleges that the Common Council decision violated the very clear requirements under New York State’s Environmental Quality Review Act.  Speaking of the suit Terence Guerriere, President of the Association, said “Regrettably, the Common Council violated many of the environmental review requirements mandated by the State law and its own City land use procedures.  We felt obligated to challenge the decision.  The private regional school’s impact on the health, safety and welfare of area’s neighborhoods is our overriding concern”. 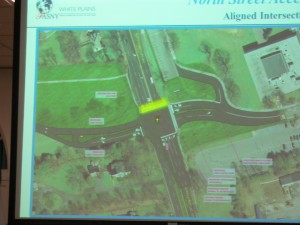 Among the most glaring omissions (the news release says) was the introduction of  a new entrance and roadway into the proposed complex without requisite public review or input.(show above)

The release claims,  the City’s own traffic report questioned the salutary effects of the revised entrance.  Mr. Guerriere said “The SEQRA process is not intended to be a multiple-choice proposition.  It is only fair to have a plan fully enunciated in order to permit complete evaluation and subsequent input from affected residents”.

The Council’s decision, (the release says) is the only time in recent memory that such a decision was made despite the overwhelming opposition to the vast majority of area residents.