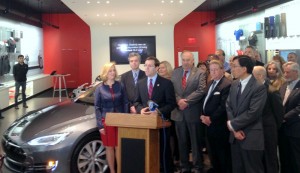 The Buchwald-Tesla News Conference at Tesla Showroom in
The Westchester Friday morning.

In addition, Assemblyman Buchwald and Tesla announced an additional measure to encourage the use of electric vehicles in New York State. As Tesla expands its Supercharger network across the State of New York to enable free long distance travel for Model S customers, it is building in additional electrical capacity and reserving extra real estate to co-locate non-Tesla charging points at Supercharger locations.

The proposed legislation would end the dire­ct sale of Tesla’s clean energy cars in New York State, and as a result, stifle environmental innovation, limit consumer choice, and impact jobs.

The bill mandates that vehicles in New York be sold exclusively through dealerships, outlawing automobile sales directly to the public.

Tesla is the only car manufacturer in New York that sells directly to consumers through its retail stores, just as Apple sells its products directly through its Apple Stores.

This announcement of growing opposition to the bill comes on the heels of New Jersey passing a rule last week to end Tesla’s direct sales of cars to consumers. The New York bill passed the Assembly Codes Committee on Wednesday, but still must be voted on by the full State Assembly before it becomes law.

Tesla intends to install more than five Supercharger stations in the State, with two already having been installed at the JFK Airport and in Syosset, Long Island. According to Tesla, the company currently uses eight New York suppliers in the development and production of its vehicles amounting to over $9.5 million in purchase orders for New York goods and services. Each of Tesla’s service and sales centers add between $7-10 million in direct economic activity.

“I have 3 Tesla facilities in my Assembly District alone, supporting 35 jobs,” said Assemblyman Buchwald. “This bill presents an immediate threat to these men and women who are contributing to the economic growth of Westchester County and the environmental innovation of New York State. Having worked in economics, I can tell you that mandating our cars be sold exclusively through dealerships is not consistent with having a competitive marketplace. We need to be encouraging – not discouraging – innovative ideas to improve our economy and environment. After what occurred in New Jersey, there should be no doubt that passage of this bill would shut down Tesla’s sales ability in New York, just as it is making strides towards giving Americans an alternative to gasoline-based transportation.”

“The fight against Tesla is also a fight against free enterprise, open economic markets and environmental sustainability,” said Jenkins. “Tesla employs thirty-five people right here in Westchester, and this is just the start of something bigger as more people go green when shopping for a new car. Protecting self-interests against new discoveries and the wave of the future goes against the strong values that have made our nation a great, transformative force. I stand with Assemblyman Buchwald in keeping the New York market open to Tesla.”

“The bill before the New York State Legislature would hurt consumer choice for New Yorkers, eliminate jobs in the state, and discourage innovation in order to benefit a special interest trying to protect its monopoly,” said James Chen, Tesla’s Vice President of Regulatory Affairs and Associate General Counsel. “Each of Tesla’s locations in New York adds $7-10 million in direct economic activity to the State. We hope we can continue to invest in New York and help make it a leader in sustainable transportation. ”

“I applaud Assemblyman Buchwald’s efforts to stop this state legislation, which would  compromise the ability of companies such as Tesla to operate in New York State,” said White Plains Mayor Tom Roach. “White Plains is working hard to expand its network of electric vehicle charging stations. Our goals are to make it easy and convenient for those with electric vehicles to come to White Plains and at the same time to encourage others to think about moving to an electric vehicle because they see that they can readily access charging stations. The presence of Tesla in White Plains supports those goals. That is why I am supportive of Assemblyman Buchwald’s efforts and opposed to this legislation.”

“Tesla recently opened a service center and showroom in the Village of Mount Kisco to meet the demands of their ever-growing client base,” said Mount Kisco Mayor J. Michael Cindrich. “Tesla has realized unprecedented success in the development of cutting edge technology that protects our environment. Government should not interfere with free trade, let the consumer decide how an automobile is purchased.  I stand in support of Assemblyman Buchwald’s initiative and invite future New Jersey Tesla owners to visit Mount Kisco’s Tesla facility.”

“New York should be doing everything it can to remove barriers to clean-energy vehicles. Unfortunately, the proposed law would make it harder for New Yorkers to buy electric vehicles by limiting choice,” said Marcia Bystryn, President of the New York League of Conservation Voters.  “This bill is wrong for the environment and wrong for consumers, and we strongly encourage our state leaders not to support it.”

“New Yorkers could really benefit from opening up the marketplace to auto sellers that use a different model, a model that protects consumers but allows direct sales,“ said NYPIRG Legislative Counsel Russ Haven. “Many New Yorkers love their local dealers and they can continue to shop that way.  But for others, including those with a Tesla in mind, it’s time to stop defending the status quo auto marketplace in New York.”

“Sierra Club stands with Assemblyman David Buchwald in opposing A 7488 which would effectively close down Tesla business operations in New York State, said Lower Hudson Sierra Club Representative Ed Berry. “Consumers would not only be prevented from purchasing electric vehicles but a new and innovative way of doing business would be stopped. This direct relationship between manufacturer and consumer can help drive future innovation and environmental progress. As a society we should be looking forward not backward. This bill is a step backwards.”

“Electric vehicles reduce harmful air pollution, cut our dependence on oil, and save drivers big money at the pump,” said Natural Resources Defense Council Director of Vehicles and Fuels Luke Tonachel. “With benefits like these, New York should be looking for ways to get more electric vehicles on the road, not throwing up detours.”

“I find it difficult to understand why this bill is even being debated,” said Assemblywoman Amy Paulin (D-Scarsdale). “Here we have a clean-energy car that can function effectively without polluting the environment. I think we should be supporting this and other ventures like it rather than fighting against it. And that doesn’t even take into account the jobs in White Plains that would be lost as a result of this bill.”

“Environmental Entrepreneurs is opposed to Bill A.7844-A,” said Environmental Entrepreneurs NY Metro Chapter Co-Director Chris Arndt. “We do not believe that Tesla, or any other company with new innovative technology, electric or otherwise, should be artificially shut out of the market and/or forced through a distribution model that may make sense for combustion engines, but not for other new approaches to automotive transport, particularly when the new approaches offer a pathway away from fossil fuel dependence and toward a clean sustainable economy.”

“EcoNeighbors, a White Plains environmental group, supports the efforts of State Assemblyman Buchwald, Tesla, and other local environmental groups to widen availability and practicality of electric cars in New York state,” said Eco-Neighbors Co-Founder Marie McCann.  “In the interests of our children and grandchildren, we must move as rapidly as possible toward cleaner energy in every sphere of human life, including transportation. New York State should not follow New Jersey’s policy of impeding Tesla sales, but should instead make it easier for Tesla to bring more electric cars to New York residents.”

“Tesla is a model company in that it is leading the charge to introduce a 21st century response to the need to reduce fossil fuels, said Bedford 2020 Co-President Ellen Rouse Conrad. “Their innovative approach, with both the cars they are producing and the solar-based charging stations they are supporting, is a win-win. One day our grandchildren will thank us and Assemblyman Buchwald for this effort to allow Tesla the freedom to solve a serious problem for our nation.”

“As Director of the Joule Assets Energy Reduction Assets investment fund–we invest in energy reduction projects and where markets make sense we invest and build jobs,” said Mike Gordon, a businessman from Lewisboro. “When incumbent industries seek to block the energy reduction economy, we can’t invest. That means lost jobs, foregone economic benefit and lost tax revenues. This bill, in my view, would not be wise.”