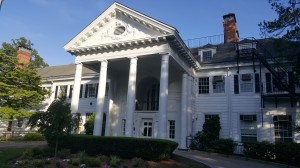 Airbnb; the new dockless bike sharing program; and the spread of new high-rise construction from the City Center into suburban neighborhoods.

The first topic on the agenda was Airbnb and the issue of whether or not the online broker for short-term lodging and rentals should be allowed in White Plains revealed reactions, for and against.

One resident, Diane, spoke of the benefits that Airbnb offered, one of which being that it is a way of “connecting people.”  As an Airbnb renter, she described her experience as “very positive.” To those in the roundtable that may have been skeptical, she elaborated further, adding that, as a renter, she can “screen out” people that could have the potential to be unreliable.

However, Mr. Brady brought up the issue of whether or not Airbnb can be truly regulated.

Echoing that, another resident named Alan, was also concerned about the fact that residents won’t know who is coming in or out of their neighborhood, saying that one of the things he loves about White Plains is “the calm feeling of knowing everyone in the neighborhood.”  The potential loss of community was another sentiment raised as well, with Alan asking, “What kind of place do you want to live in?”

Another concern with allowing Airbnb into White Plains was how it would change the business framework of the city in addition to overcrowding in residences. 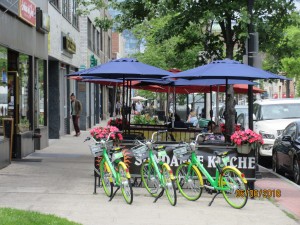 Mr. Brady next steered the discussion to the topic of the dockless bike sharing program that White Plains is participating in.  The two companies that are part of the program are Lime and Ofo.

To use Lime and Ofo, residents need to download the Lime or Ofo mobile app (available on iOS and Android) and register their basic information and payment method.  With the apps, residents can locate a nearby bike, scan the license plate (for Ofo) or the bike (for Lime), and ride. When they are finished, they can park the bike in an appropriate location and lock it so another rider can use it next.

The Common Council adopted the dockless bike sharing ordinance in March which paved the way for White Plains to participate in a one-year pilot program, according to the press release from the Mayor’s Office dated June 4th 2018.  The press release states that this “authorizes the City to establish a permit process through which dockless bike share operators can operate within the city.”

During the first 30 days of the program, up to 150 bikes will be in use in White Plains and just like riding private bicycles, riders participating in the bike-sharing program are subject to rules governing safety and accessibility.  For instance, the bicycles cannot block pedestrian access to sidewalks, accessibility ramps, or entrances to public and private property. The bicycles also cannot block vehicular traffic.

Residents’ concerns about the pilot program.

One resident felt that the scattered bicycles were an “eyesore”, while others agreed that the “placing of it is a problem.”  According to one member of the roundtable, businesses have complained about riders leaving the bikes in front of their stores, blocking the entrances.

Mr. Brady noted that the bikes scattered around “kind of serve a purpose,” referring to the fact that anyone with the mobile app can locate a bike that has been left nearby.

Another resident, Max, said that “Biking is a culture,” and that he hopes that people would learn the right way to leave the bikes when they are finished using them. He also asked, “Who from the city is answering questions about how the companies are operating?”

Other residents felt that the city should offer bicycle safety instructions. (White Plains does offer this through the parks department: http://www.cityofwhiteplains.com/documentcenter/view/331)

Some of the positive aspects highlighted were fewer cars on the streets and the bicycles were an affordable way for people to get around the city.  Another benefit is that if a pedestrian sees a bicycle left in a hazardous place, they can call either company–Lime (for the green bikes) or Ofo (for the yellow bikes)–and tell them.  The companies keep records of who was using the bike and when and can block out riders who don’t observe proper safety protocol.

The final topic of discussion for the evening was the spread of high-rise development into residential neighborhoods in White Plains, beginning with the development of 52 North Broadway (pictured below).  The development will include market-rate housing, dormitories for students attending Pace University, and housing for seniors. 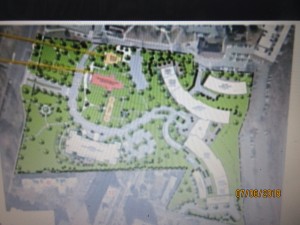 Mr. Brady noted that the buildings in the development will be away from North Broadway(on left in the photo above) in order to preserve the former Good Council green.  The majority of the development will be toward the rear the property (in lower right of the picture above), adjacent the Cross Westchester Expressway, which will impact people who live near the project in the back on Stewart Place.

Mr. Brady next asked a member of the roundtable, Barbara, to provide the other attendees with more information about the project.

Barbara mentioned that they want to rezone residential areas and that if it is happening with the North Broadway project, it could happen to other neighborhoods as well.

An additional concern that Barbara raised was traffic congestion on North Broadway, near the new development.

She said, “The biggest issue is that it becomes a traffic nightmare for everybody.” Barbara also said that the number of cars is going to increase to 1,000 per day, ranging from people visiting to drivers making deliveries.

With the rise in new developments being built now and others potentially in the future, the traffic situation will be an issue, with entrances to the cities from the highways, such as I-287, becoming congested.  Residents were also concerned about the proliferation of “city-sized” buildings in residential neighborhoods, with one saying, “It’s a city-wide problem.”

The rise in vehicular traffic poses another concern: public safety.  If there is an emergency, it was argued, the fire department would have trouble reaching people.

As a resident described it, “It is an absolute public safety issue.  Our fire department is down by the train station. Can you tell me, in a high rise, when we need a hook and ladder, how it’s going to get to Stewart Place when there are a thousand cars in the TransCenter and you’ve got four hundred cars on the corner there…how are they going to get up Barker Avenue and across North Broadway?”

Will Market Rates be Affordable? Is White Plains Growing too Big?

With the rise in new luxury developments being built in the city, people were concerned that there would be a lack of affordable housing and rents would increase for everyone.

This led attendees to ask the question of,  “What kind of city do citizens want White Plains to be?”

With the population of the city estimated to be between 58-59,000, some were wondering if the population boom is necessarily in the best interests of the city at large.  Residents can write letters and attend Comprehensive Plan meetings and offer their views on what they would like White Plains to be. The loss of “Mom and Pop” stores in the city is another concern as well, with some residents lamenting the loss of community and camaraderie.

After the meeting, the Co-Vice President of the The Council of Neighborhood Associations, Chris Price, had this to say: 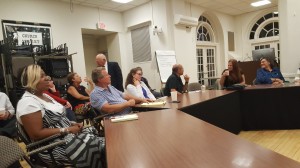 “I think businesses need to be smarter about how they service this community.”  He noted that it is about evolving with the needs of the community as well.

The next meeting of The Council of Neighborhood Associations in White Plains will be in October.

(Note: Photos of the bikes and the 52 North Broadway Development, from WPCNR)