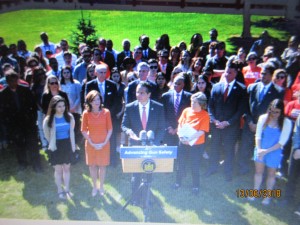 Governor Andrew M. Cuomo Tuesday stopped in Westchester County as part of the statewide campaign to pass the Red Flag Gun Protection Bill, which kicked off Monday, June 11 on Long Island and in the Bronx.

The Red Flag Protection Bill, also known as the Extreme Risk Protection Order Bill, was advanced by the Governor last week. The bus tour stopped at White Plains High School to bring together local elected officials, school staff and students in support of the bill.

Westchester County leaders endorsed the bill, which would prevent individuals determined by a court to have the potential to cause themselves or others serious harm from purchasing, possessing, or attempting to purchase or possess any type of firearm, including hand guns, rifles, or shotguns.

This legislation builds on New York’s strongest in the nation gun laws and prior legislative efforts, and, if passed, would make New York the first in the United States to empower its teachers and school administrators to prevent school shootings by pursuing court intervention.

“New York will not stand by and wait for Washington to take action against the gun violence and school shootings that have become all too common in this country,” Governor Cuomo said. “Parents should not have to fear sending their children to school every day and teachers should not have to wonder if they will return home from work. Together, we can and will pass this common sense gun legislation and we will continue to fight to ensure gun violence has no place in this great state.”