↓
Home Menu ↓
Home→PUBLIC HEARING HELD BY STATE ASSEMBLY COMMITTEE AT MICHAELIAN BUILDING NOW ON STATE ASSEMBLY WEBSITE AS OF THURSDAY A.M. INSTRUCTIONS ON HOW TO FIND IT IN FOLLOWING ARTICLE 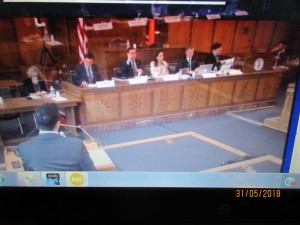 The opening of the May 29  Public Hearing of the State Assembly Committee on Corporations, Authorities, and Commissions Tuesday at 10 A.M  on the subject of storm response by utilities. It was not streamed on the internet on either the State Assembly website which gave NO instructions on their website on how to see the live stream or streamed live the Westchester Government website. This morning the complete video of the hearing was posted on the Assembly website, 48 hours after it happened, with again NO INSTRUCTION on the Assembly Main Page where to see the video, not even a photo and headline.

The public hearing that lasted 7-1/2 hours Tuesday held to ascertain the extent of the failure of area power companies to restore power across Westchester, Rockland, Dutchess, and Putnam counties and points north for two weeks is now available for viewing on the New York State Assembly website.

Since this morning, WPCNR has learned  through an informed source who was watching it that the Assembly did stream it live, but there was no instruction Tuesday morning on the  NY Assembly Site Homepage, the source said. They also noted that less than 100 persons were viewing the stream at the time. 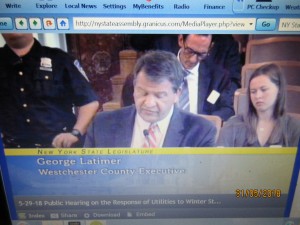 It me be of interest to Westchester residents and across the state, since this hearing was not streamed live by Westchester County government existing streaming technology, which they do for proceedings in that Michaelian Building Legislative chamber on virtually a daily basis.

To compound this inexplicable failure to communicate of how to see coverage  an important hearing on the Westchester.gov website, the hearing was not streamed live on the New York State Assembly website.

I know that because I looked for it at 10:30 AM on the Assembly website and it was not there. It was not there. If it was being streamed, there is no way you could discover how to find it. When I punched  the “Watch Live” button on the Assembly Home Page, I got a bunch of pictures with no promo of the current stream whatsoever. So either the assembly team had started it late. The Assembly Press Office has not responded to WPCNR for an explanation of this communications gaffe.

The hearing, also I am told by a responsible media person who was there was not covered by the local press or the New York metropolitan area outlets while it was live. No cameras were observed by the media expert contacted by WPCNR

There was also no coverage yesterday in the news outlets, paper or electronic. Where was the New York Times? The most crucial local story in the last month ignored by all the news fit to print.

Inquiries to Westchester County Board of Legislators Chair Benjamin Boykin, and the county press office as to whether the New York State Assembly denied Westchester County the live televising of the hearing have not been responded to.

The Assembly press officer contacted yesterday afternoon by WPCNR did not respond when asked when the Assembly would be finished posting the 7-1/2 hour hearing. I do note however it is up this morning. Good work, Assembly!  It only took 48 hours.

The media source WPCNR spoke with yesterday said the State Assembly had brought in their own streaming equipment and crew to record the meeting.

So to catch you up on this hearing, here is where you can find it on the New York Assembly website.

The link to the public hearing is not splashed on the front  Assembly Homepage, as if they almost don’t want you to look at it.

I mean if used taxpayer dollars to record something for 7 and a half hours I would think you would ballyhoo that. Splash it on the front page of the website. I would if I wanted you to see your state assembly at work.

The Assembly press office also did not respond to the WPCNR question asking if the assembly denied Westchester government the right to stream live from their own chamber.

Finding the video on the New York State Assembly is difficult. so here is how to find it, step-by-step:

1. Paste this in your browser:

Video Camera Icon  with the words “Watch Live” near the Facebook icon in the upper right.

You will be presented with the “Assembly Proceedings” Page, and in the center you will see a pic entitled “Committee Hearings”.

Click on that Committee Hearings  photo and you will be taken to the video list, the hearing you want is this one entitled, and click on MP4 Video. It has all 7-1/2 hours of this marathon hearing.

In the first 20 Minutes you will hear Amy Paulin of the 88th Assembly District, Chair of the County Board of Legislators, Benjamin Boykin, David Buchwald, Assemblyman.

County Executive George Latimer repeats his demand that the Public Service Commission examine and evaluate the mutual disaster aid plan the utilities now use (sending for convoys of equipment and crews from out of state) and that has failed repeatedly to restore Westchester County in a timely manner in storm after storm the last 18 years.

Also of note is the  Public Service concerns in which their representative seems to be indicating according to a person who caught the testimony that their jurisdiction may not enable them to demand changes of the utility procedures that it is a matter of the state legislature to consider.