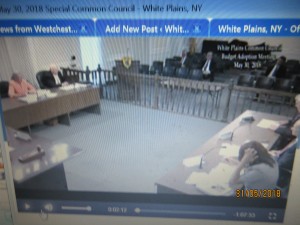 THE BUDGET APPROVAL SCENE LAST NIGHT AT THE COMMON COUNCIL CHAMBERS IN DOWNTOWN WHITE PLAINS NY USA. THE LIVELY 1-HOUR MEETING MAY BE SEEN HERE COMPLETE WITH THE LIVELY FEISTY INTERCHANGES OF MAYOR, COUNCILPERSONS AT

The budget in the ordinance approvals following the approval of the budget, approved a geographically sensitive parking policy, giving the city the power to price outlaying city parking lots away from the downtown, more leniently than the city garages in the center of town. The geographic areas have yet to be defined. Though it is not clear whether garages along Main Street will go up in price slightly, the Mayor said lots such as Waller and Maple would allow residents to park for more than one hour unlimited for $1.25. Currently there is, WPCNR believes a 1 hour limit.

Councilwoman Milagros Lecuona told WPCNR the policy is the beginning of implementing a system now in use in San Francisco where parking in the center of the downtown is more expensive than parking in the outskirts of the city limits. The city of Cincinnati also has implemented such a policy.

Another parking change was approved as part of the budget. An issue that new Councilman Justin Brasch campaigned on was put into effect. Parking will now be free in the City of White Plains on 6 National Holidays: July 4, Labor Day, Thanksgiving, Christmas, New Year’s Day, and Memorial Day.

Not Free Parking on Holidays in city garages or city lots.

The legislation approving the “Free Parking” on holidays, though only says parking is free at on-street meters. This means that if you go to White Plains on July 4 a Wednesday, you can park at meters on the street Free, but you have to pay for parking in the city parking lots and garages.

Raises of 2% were approved for Commissioners and  the Mayor, and secretaries and staff of some departments, including the Mayor’s Office.