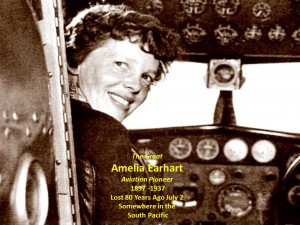 Lost today eighty years ago. She lives today eternally flying  into the sun.

There were no stories that I could find in the area papers on Amelia Earhart, the most accomplished woman pilot of all time who was lost at sea on July 2, 1937.

No remembrances accounting her accomplishments. Her advocacy for women’s rights. Her multi-talents.  Her own courage, and building respect for women’s abilities and inspiring millions of women and men with her aviation “firsts”.

Susan Butler, the author of  East to the Dawn, (Addison Wesley Publisher) the definitive biography of Amelia published in 1997, 60 years after Amelia’s disappearance on route to Howland Island in the South Pacific: wrote this paragraph describing her contribution to aviation and her ability to inspire the American public. I could not write a better one, so I wanted to share Ms. Butler’s  next to last page comment on Amelia’s contributions and hold on us today:

“Amelia came into the public eye because she was an adventurer, but she was more: she was America’s sweetheart. America’s shield.

She did everything better than anyone else—beckoned us on, and set more records, and she did it seemingly effortlessly.

She made us proud to be an American.

Perhaps she was cut down in her prime(39 years of age)—perhaps because she did not quite have time to fulfill her potential, but we can’t let her go.

She is thirty-nine forever. She has become America’s dream woman.”

America needs to remember and be reminded of excellence as demonstrated by Ms. Earhart so poignantly.

The author Susan Butler quotes the epitaph Ms. Earhart wrote for her friend, the pilot Wiley Post, noting that it might have served as Ms. Earhart’s own and I paraphrase it:

“So close was she to her profession that she could not know the sheen on her own wings.”

. The program will be on White Plains Television Monday evening at 7  on Verizon Fios Channel 45 countywide and on Altice Cablevision Channel 76.