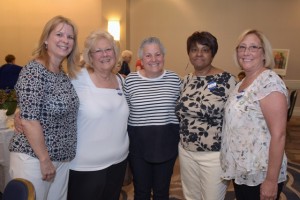 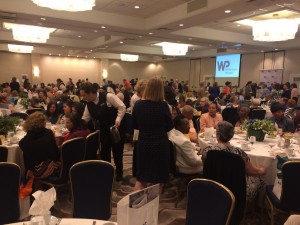 The crowd of well-wishers, doctors and 200 White Plains Hospital- treated cancer survivors were in attendance. Photo by an attendee.

Now in its 30th year, the event celebrates the courage and determination displayed by cancer survivors throughout the community. It also acknowledges the fight for the cure that doctors and the entire multidisciplinary team engage in every day. 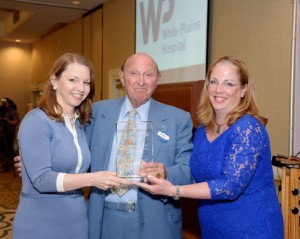 The 2017 guest of honor and keynote speaker was Nicholas Signorelli of Mount Vernon who was acknowledged for his strength and courage throughout his cancer experience, as well as his longtime support of the White Plains Hospital Cancer Program.

Mr. Signorelli was joined by approximately 300 fellow cancer survivors, caregivers, physicians, nurses and other clinicians in the Hospital’s Cancer Program, which treats thousands of patients every year. 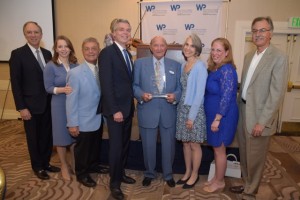 “This is a day when we can step away from our professional roles and simply enjoy the company of our survivors,” said Dr. Gordon. “It gives us the opportunity to celebrate special milestones with survivors and their loved ones. It also inspires us to further our efforts in finding increasingly effective treatments so that the number of survivors can grow even larger.” 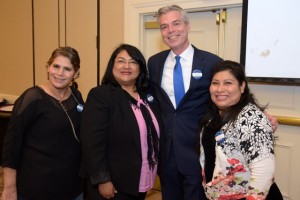 In addition to a festive brunch, the survivors and their caregivers were offered the opportunity to experience massage therapy and healing touch by trained members of the Hospital’s holistic care team. They also learned about the scope of complementary care programs and services provided by the Cancer Program.

In 2016, the Hospital opened its new Center for Cancer Care, an expanded facility that provides comprehensive and coordinated cancer care in partnership with the Montefiore Health System.

You can view the WHITE PLAINS TV “PEOPLE TO BE HEARD” VIDEO TOUR OF THE CENTER FOR CANCER, WITH DR. UNA HOPKINS and PEOPLE TO BE HEARD’S JOHN BAILEY, VIDEO-TAPED IN JUNE OF LAST YEAR ON YOUTUBE AT

The new Center is double the square footage of the original Dickstein Cancer Treatment Center, which opened in 1999.  It encompasses the renovated Dickstein pavilion, an additional six-story outpatient physician oncology pavilion, two infusion centers, and ample space for complementary therapies and amenities designed for optimal patient comfort and an enhanced patient and family experience.  The Center for Cancer Care also offers a multitude of clinical trials and groundbreaking research opportunities for patients, many in collaboration with the Montefiore Einstein Center for Cancer Care.

According to the NYS Cancer Registry, more than 100,000 New Yorkers are diagnosed with cancer every year. The American Cancer Society estimates that there were nearly 14.5 million cancer survivors in the United States in 2014, up from 9.8 million in 2001 and 3 million in 1971.