↓
Home Menu ↓
Home→Today, 73 Years Ago, The Thousands, The Brave, The Strong, The Everyday Men, The Good Died and Lived to Defeat Tyranny and Evil: D-Day, 1944 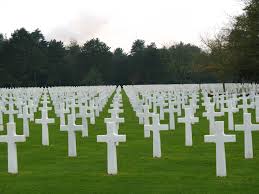 It is 73 years today since allied troops died and lived on Normandy’s beaches in France in the largest military operation in history to turn the tide against Nazi Germany, the ultimate evil Third Reich.

It is a day to remember, reflect. Examine ourselves. Would we have the courage those men and women did?

I thought in preparing my simple news program yesterday, what kind of a visual should I put up to remember those brave who faced massive, withering fire hitting them and dying instantly on those beaches? Should it be the sobering pictures of the wounded? The sobering lineups of  corpses in the sand? The overhead awe-inspiring photographs of the landing?

The crosses are all the same. And there are thousands of them in graveyards like the one shown here. The legacy of spent humanity, all the same in death, united in death no matter their nationality, creed, religion.  Next time you hear the speeches of hate and prejudice and superiority, please remember this picture and this day.

We can in no way, or through any motion picture know what any veteran experienced that day. The veterans who still are with us do not like to talk about their combat experiences. And they do not.

One veteran of D-Day, asked what he thought of Saving Private Ryan, the movie of a few years ago depicting the landing and the realism of it, said the real D-Day was worse. However, veterans we have interviewed remark that they think of their combat experience every day. It is always with them.

It is inconceivable to me that I could ever be able to do what these men and women did. I would like to hope I could have. However, the veterans have.

They left ordinary lives as teenagers office workers, factory workers, farmers, accountants, and what have you and were able to go to war and “rise to the occasion,” or as they say today, “step it up to the next level.” The highest level.

Few of them are left now. But today their sacrifices should be remembered.