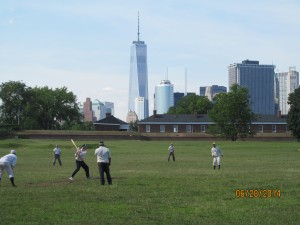 These are the times that try baseball fans’ souls. It is the best of times, it is the worst of times. Baseball has never been more popular.

More people attend Major League baseball games than any other professional sport except auto racing. Baseball ratings on television are not the best, however, and they want to fix that.

But the business people who run baseball are not happy. They want to speed up the game. Rob Manfred, Bud Selig’s pick to head major league baseball and Joe Torre, Chief Baseball Officer,who weighs in on competition issues have done it again and are starting to tinker with The Game.

This week Manfred, with Joe Torre’s agreement, arbitrarily eliminated the need to pitch 4 four balls in live action when a baseball manager orders an intentional walk. The rationale: it would speed up the game. They feel is a problem with baseball’s pace.

In the past, during a 4-wide one  sequence, anything can happen because the ball is live. The pitcher can throw a wild pitch might wing it  over off the catcher’s glove, allowing say the runner on second to steal third. Now, the pitcher might not want to walk the batter at the plate. But if you make the intentional walk automatic, you won’t have that option. Possibility of unexpected consequences is eliminated.

Another defensive advantage is provided by the straight 4-ball intentional walk: the possibility of a pick-off play of the runner on first or second on the 1st, 2nd or 3rd pitch, thus instantly removing the need for the intentional walk (usually an intentional walk is given to set up the double play, usually with a runner on second).

There’s also the possibility of passed ball, or the hitter flinging his bat at the pitch and putting it in play with a hit and run or a bunt and run on (far-fetched, but something a John McGraw might like).

There is another subtle liability to the newly instituted automatic intentional walk: It gives a real advantage to the pitcher and the defense.

Here’s why: Often when an intentional walks are executed the old-fashioned way, not every pitcher can instantly go back to throwing strikes. Sudden loss of the strike zone by the pitcher,after issuing an intentional pass (I love those words, don’t you), is not uncommon.Now with no requirement to throw 4 wide pitches, the pitcher does not have to break his pitching rhythm by tossing 4 balls way off the strike zone. This is distinctly an advantage for the pitcher.

There’s also the delayed steal play that can be executed by a runner on second  during the course of an intentional walk. As the catcher leisurely tosses the ball back to the pitcher, the runner on second who has casually ambled a third of the way to third, high tails it for third as the ball is half way being lobbed to the catcher, or just as he is leaping or reaching for the tossed pitch. Timing has to be precise. Catcher has to fire that ball across the diamond to third, maybe wildly, and maybe the third base person is flatfooted and drops the ball or misses it and BOOM—the runner on second steals third and home on one pitch. You will never see that play ever now that Manfred and Torre have eliminated the 4-pitch intentional walk.

What a minute though, have these evil scientists forgotten something? Puffing on a White Owl Wallop looking out of the empty press box on the immense green, I thought — hey is the ball dead after the intentional walk is signalled?

If after the intentional walk is signaled, and the ball is not immediately dead,  the umpire says “take your base” the runner (in the great Pete Rose style) can sprint to first and keep on going with the runner on second delaying steal until the pitcher is duped into throwing to cut off the runner hell bent for second, perhaps throwing it wildly. If the ball is not dead immediately after the manager tells the umpire I want to intentionally walk this guy,  a rundown could ensue, with a good base runner stopping between first and second, confusing the pitcher,  allowing the runner rounding third possibly to score if the rundown lasts long enough. What do you think baseball mad scientists? is the ball dead after the automatic intentional walk, or not? It’s dead after a hit batsmen. What’s the call?

Baseball is doing this to attract more television and fan appeal because the games are too long, they say.

However the fans like to go to baseball games. Though the NFL has the best average attendance of professional leagues in this country, 69,487, the NFL plays a game once a week and over 256 games in 2016, the league drew 17,788,671.

The place where baseball would like to be is to have more fans watch baseball on television.

Baseball’s prevailing wisdom is they have to make the game faster to attract the younger fans who like action. So they are starting with eliminating the intentional walk. What they do not realize is that when you cannot stay up to see a big game as a kid past 10 PM, you are not hooking the young fans. The geniuses who run Major League Baseball do not realize this.

Their next ideas really strike at the heart of the game:

The pitch clock: this may be coming. I totally hate this. Nothing was better than a fidgety, edgy pitcher, (Lou Burdette comes to mind), making the batter get impatient. It was a strategy. I still remember a classic doubleheader at the big ball park when Gene Bradender of the Seattle Pilots pitched the nightcap, went 3-2 on every hitter, and took a minute between each pitch. There were other slow motion pitchers (Vinegar Bend Mizell, Luis Tiant, Big Newk, Warren Spahn (We still remember you Spahnie) The fans were really getting on Brabender in that doubleheader.

Pitching clocks would have to require standard motions. Well anyway, it might make the game go faster, but it will hurt the pitcher. It would make baseball mechanical, like the NBA. You like to think out a pitch in a big spot. Would the pitch clock stop and start again when a catcher goes to the mount to workout signals when there’s a runner on second? Lotta questions kemo sabe.

Higher, narrower strike zone: The Major League Players Association said no to this one and Mr. Manfred was not happy. What this will do is take away the corner strike low across the knees, I think and force more pitches down the middle belt high and at the letters—major league hitters love them down Broadway over the plate. This would mean more hits, more runs and run-a-minute baseball like the NBA. Well there’s one difference, baseball is timeless. The way I watch a Knick game is wait and turn it on in the last two minutes. I only do this once in a great while.

Lower Mound: Again this may improve hitting and action. But more runs will create longer games.

Has instant replay review really made the game better?

No. There are no arguments any more. My favorite baseball moments were when Casey or Ralph (Houk) or Billy leapt out of the dogout, and confronted Augie Donatelli, Jim Honochick, Jocko Conlon, and the tough Italian umpire, Frank Dascoli. Classics. Ralph would end up kicking dirt on the ump’s shoes, then dropkicking his hat. I miss that.

Now, the reason baseball ratings are not too good is the games are played at night and last about 3-1/2 hours. Now, I have a suggestion:less commercial time between innings.

If you want to cut the time of games for television, cut the spots. World series and postseason games often are decided at midnight when few are watching. The Super is over by10 PM. Baseball might take a lesson from that simple fact.

Some other good things about the intentional walk: You can get a couple of dogs and a beer from vendor while you are anticipating the next possibilities, a well-timed “Beah heah!” is an art by the stadium vendors.

If you wanted to really speed the action you could change the rule that the pitcher charged with an intentional walk has to face the next batter. A lot of times, there is a pitching change made right after the intentional walk. But because the pitching is so lousy beyond today’s starters, the new pitcher is as likely to waste time throwing gasoline on the fire than as not.

Oh, and another thing—Skip the warmup pitches from the mound after a reliever is waved in. This of course would cost a commercial or two if you did that.  But, this too adds color to the game. As a fan you like putting glasses on the reliever and pretend to evaluate his motion, (it’s a fantasy, but it’s what fans do).

The answer is do not sell that many spots.

In the old days, teams had one sponsor or two. The Bronx Bombers had Ballantine and Winston, the Dodgers Old Gold and Schaeffer, the Giants, Knickerbocker Beer and Chesterfield. Now you have all kinds of spots, plugs, tags, sponsorships of the game time temperature. It’s machine gun selling on the air on TV and radio.

What major league baseball might do is make it easier to buy tickets.

I went online to buy Yankee tickets for the Opener. The windows to pick your cost of seats did not come up; the section diagrams were not instantly readable; you could not select how many tickets you wanted. It was obviously overwhelmed. Websites supposedly make it easy. I don’t think they do.

I was going to make my peace with baseball then the numbers people eliminated the intentional walk, and next season God knows what else.

Numbers crunchers are breaking up that old game of mine.