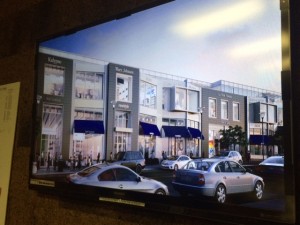 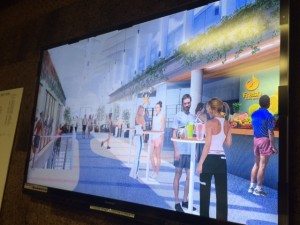 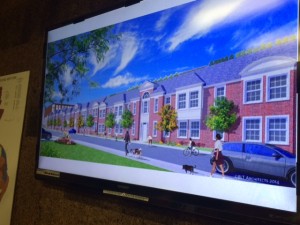 During a Special Meeting of the White Plains Common Council held Monday night at the Mayor’s Office, Mark Weingarten, ( of DelBello, Donnellan, Weingarten, Wise and Wiedeker) the lawyer representing Grid Properties in the development of “The Boulevard” project, requested re-zoning of the former Maple Ave./Post Road Sholz car dealership site, the closing of Brady Place, and to obtain site plan approval.

“The Boulevard” will be a mixed-use specialty retail and residential property featuring dining options, and boutique-style fitness clubs.

According to Weingarten, in order to move the project forward three small parcels of land will need to be changed over to the B3 zoning code, which will allow for the placement of fitness clubs in the area—a major design component of the project.

Grid Properties’ goal is to develop Post Road into a more pedestrian-friendly place, and create a “vibrant” entry from the southern end of White Plains that replaces the “blight” that has existed opposite to residential communities in the area for years–thereby creating “a relaxed neighborhood experience” in contrast to the low-rise retail and high-rise apartments that are commonly found throughout the city.

The developers promise to provide an eclectic mix of small, and medium sized dining, shopping and fitness offerings. 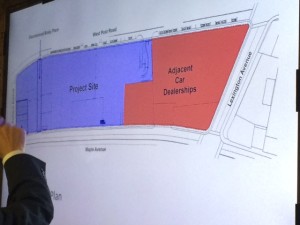 Site of The Boulevard. 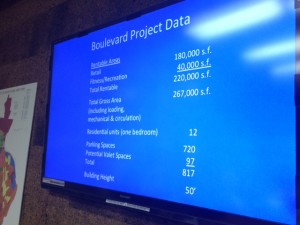 Running from Lexington to Rathbun Avenue on 4.2 acres, Grid Properties is proposing 180,000 sq. feet of retail, with 40,000 sq. feet dedicated to fitness uses—the health club uses will need a special permit from the planning board.  The site will also provide 720 spaces of free parking, and another 97 of potential valet (requiring tip only).  Additionally, 12 rental townhouse units will be erected facing Maple Ave as part of the project.

Instead of housing a large branded health club, Grid wants to put together 10 different vendors that are specialists in their area—i.e., kickboxing, yoga, etc.  Each one of the tenants will have an outdoor space as well as an indoor space, and a common place with juice bar and wearables.

Unique features of the project include street level retail, with a second level that is actually a grade level behind—a design element that Grid representatives admit is difficult to visualize without looking at the built model.

Additionally, a brick “Mill Building” will be placed at Brady Place to create architectural contrast with the rest of the buildings that will be of a more modern design. 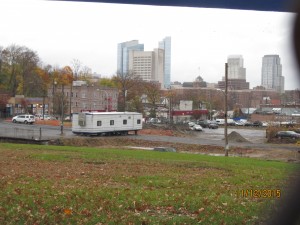 Demolition on the site has already been completed.  All buildings will be new construction and LEED certified, incorporating sustainable infrastructure and materials.

Due in part to the used car dealership, dry cleaner, and a gas station previously located on the site—the gas station had an oil spill at some point—the site has been entered into the Brownfields program for remediation.

With White Plains Hospital nearby the site will potentially attract people visiting and working at the hospital—as well as those from neighboring towns.

Grid has been marketing the project for over a year now, and says the boutique fitness businesses have been very responsive to the idea of being next to each other. 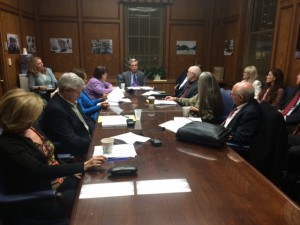 During the question and answer portion of the presentation, one council member communicated that her key concerns were:  odors from garbage disposal, design, and safety for pedestrians.

Regarding design, the council member was not partial to the level design element of town houses.  She suggested looking at a height-adjusted project in Tarrytown as an example of good design. Grid admitted that this aspect of the project (the  townhouse design) was the least developed.

Council members also raised concerns regarding whether Grid Properties had entered into a dialogue with nearby Calvary Church regarding parking overflow, to which Grid replied they had not, but had no objections to doing so.  Council members asked whether the housing units were “10% (affordable) 90 (market)” compliant in terms of affordability.

Grid replied that the town houses were “market” in terms of affordability—but that they would comply with any required regulations.

Environmental questions posed by the council addressed an interest in extending energy efficient design to the neighborhood in terms of sidewalks and parking areas by employing green materials, and the development of a plan for dealing with storm water.  The project is being designed by BLT Architects, and is slated for completion in the 4th quarter of 2016.