↓
Home Menu ↓
Home→THE ESPLANADE TO REINVENT ITSELF: CONVERT BUILDING INTO 220 RENTAL UNITS. THE 150 ASSISTED LIVING RESIDENTS TO BE RELOCATED By Ayana Meade 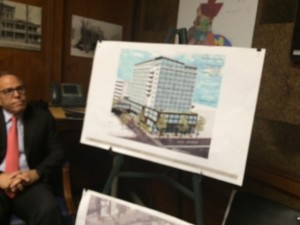 A rendering of the new Esplanade presented Monday evening at the Common Council Special Meeting. Esplanade Properties plans a complete interior and exterior “makeover” to create apartments. The construction will require the 150 assisted living residents currently living there to find other apartments or living arrangements. Rendering, Esplanade properties. Photo by Ayana Meade

A plan to completely re-develop and re-purpose the Esplanade Properties—two buildings located opposite the Pavilion Shopping Center in downtown White Plains—was presented to the White Plains Common Council Monday night, during a special meeting at the Mayor’s Office.

The plan involves converting the two existing buildings at the intersection of South Broadway and Lyon Place into a mixed-use space offering 212 residential units, 9000 sq. ft. of medical office space, 6,750 sq. ft. of restaurants, and about 2,100 sq. ft. of retail.

One of the buildings slated for re-development (95 South Broadway) is currently being operated as a senior assisted living facility and is home to 150 senior residents who will need to be relocated during construction.  The other building (4 Lyon Place), currently operates as the Esplanade Hotel.  The two buildings are connected by an overhead, enclosed walkway that crosses Lyon Place.

The reimagining of The Esplanade Properties comes at a time when similar revitalization projects are slated for the East Post Road-South Broadway corridor on the hill above The Westchester mall—including the demolition and replacement of the nearly vacant Pavilion Mall with two residential towers as well as street level restaurants, and retail shops. That (The Pavilion) $275 million plan is currently under review by the White Plains Common Council.

However, equally important and significant in the Esplanade re-development conversion is the careful transition and relocation of the 150 senior citizens currently residing at the Esplanade Senior Residences.

Esplanade Partners says they have yet to finalize the precise logistics regarding how the relocation will be handled but say,

“Management recognizes its responsibility to see that the transition is handled with a minimum of stress.”

Esplanade Partners estimates that the approval process will provide the time necessary for the residents and their families to explore suitable alternatives—stating that it is not expected for construction to begin in the main building requiring residents to move out, for at least six months.

A communication has gone out to residents—residents have received notice so they can begin planning for alternative living arrangements if necessary between now and commencement of construction. Esplanade Management and staff say they will also work closely with the residents and their families to find housing either at other Esplanade properties or non-Esplanade properties.

To house residents who require more time to find new residences Esplanade Partners is considering using the Annex (4 Lyon Place), saying they could have folks move over from the Esplanade to the Annex and still provide all the services necessary and begin renovation of the tower—however, the implementation of this plan has yet to be decided.

When asked by the Common Council whether Esplanade residents had the option of transitioning into the re-developed property, Esplanade responded that those truly independent residents may choose to stay after construction is complete, with the understanding that the new residence will not be a service provider.

Kensington and The Bristol Suggested

Esplanade noted that the average age for independent living is 82; assisted living 87—saying that the folks that are currently residents at the Esplanade “Would probably seek a different location. This is not a senior assisted living facility—we can transition them to other nearby facilities such as the Kensington and the Bristol.”

The Esplanade plan entails extensive renovations, including replacement of the exterior of the 15-story main building (95 South Broadway) and the installation of energy efficient heating and air conditioning systems, windows and doors to bring the building’s outmoded mechanical infrastructure up to modern day standards.  However, nothing will be demolished.  The buildings are not proposed to come down in their entirety—there is no expansion of the footprint.

Other plans include improving the pedestrian streetscape and the skyline. On the back corner of the main building, three floors will be removed which will give the building an “L” shape.  “Maisonettes”—6 brownstone-like duplex units with sidewalk entrances will be built on Lyon Place providing a residential streetscape. An indoor pool, yoga studio, fitness center and other amenities will be available to residents.

The following is the proposed rental unit mix, which is still subject to change:  62 studios, 107 one bedrooms, and 43 two bedrooms. The smallest studio is 400 sq. ft.—that’s 50 sq. ft. larger than the existing hotel rooms there today. The largest unit is 1,155 sq. ft. (2 bedroom apartments at the top corner units).  Esplanade properties has not established unit costs, but estimates they will be somewhere in the range of $35 per square foot.

When asked by the Council who their target demographic is, Esplanade responded that they weren’t at the point of marketing, but that the concept was to attract both ends of the spectrum—younger folks working in White Plains and empty nesters looking to downsize. Esplanade believes that these rental niches are underserved throughout Westchester.

Esplanade Partners has already secured permission from the zoning board of appeals for a new roofline architectural feature, and during Monday’s meeting requested a zoning text amendment that will allow for the repurposing of the buildings and the elimination of a restriction that requires 500 sq. ft. per dwelling unit based upon lot area—elimination of this provision will allow Esplanade Properties to yield the desired 212 units.

Esplanade Partners requested to be placed on the Council’s next agenda to begin formal commencement of review, and to work cooperatively with the Council on the requested text amendment. It is expected that the Council will refer the plan for review by various City agencies.