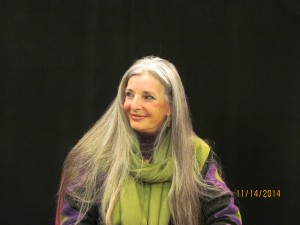 Councilwoman Milagros Lecuona on her appearance on PEOPLE TO BE HEARD last fall.

Pending receipt of a promised copy from the Mayor’s office of the Matrix Consulting report on the operations of the  White Plains Department of Public Works, WPCNR contacted White Plains Councilwoman Milagros Lecuona on her impressions of the report.

I asked her Monday morning what her feelings were about the report which was cited by Mayor Tom Roach as the basis for the removal of Mr. Nicoletti. Ms. Lecuona voted not to remove Mr. Nicoletti.

Ms. Lecouna in a statement to WPCNR was troubled writing:

“Yes, I read the report.
First of all, it was given to me as CONFIDENTIAL so I don’t understand why information was released by the mayor’s office to the JN (Journal News) without telling us that it had become a public document.
Second, a technical report of 218 pages requires addressing numerous and important questions that it generates.
No information sessions with the council were conducted. No discussions about the report did take place.
I, as a trained architect with more than 30 years of construction experience was never asked what I thought about it.
Third, I have great reservations about who, why, when and how the decision was made about hiring this specific Matrix consulting group from Illinois. Tax payers paid $41,000 for this investigation.
Fourth, The consulting report primarIIy deals with engineering aspects of the DPW, yet this firm has no licensed professional engineers on staff.
Because of that, Matrix, after several months on the investigation had to hire a consultant who’s an engineer from Florida. And why a company in Illinois?Fifth, the numerous inconsistencies, misinformation, selection of projects as proof of some of this report’s findings only shows that Matrix didn’t fully understand the scope, quality, diversity and complexity of the work that the DPW in White Plains undertakes all year round.
I could keep on going……..”