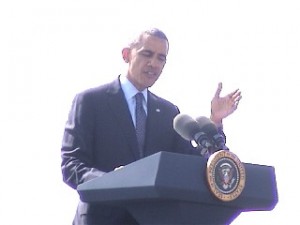 President Barack Obama addressing some 300 politicians, officials, and citizens on the need for Congress to fund the rebuilding of the nation’s infrastructure by replenishing the Federal Highway Trust Fund by August. All Photos by Peter Katz

President Barack Obama visited Tarrytown on Wednesday to use the aging Tappan Zee Bridge, and the construction work which is underway on a replacement bridge, as the backdrop for a speech pressuring Congress to appropriate funds to rebuild America’s transportation infrastructure. 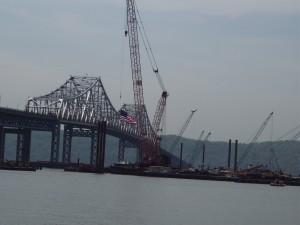 The Old Tappan Zee Bridge and the pilings of the New NY Bridge behind President Obama as the President in a 17-minute speech sketched the need for Congress to act swiftly to supply new billions for rebuilding America’s roads, rail and transit.

The event took place at the Washington Irving Boat Club fronting on the Hudson River. It was by invitation only, and Democrat politicians comprised a large segment of some 200 to 300 in attendance. 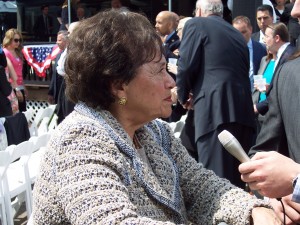 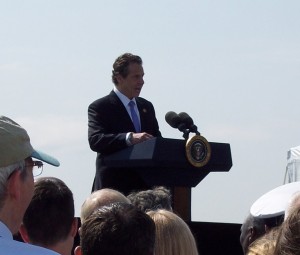 A construction supervisor spoke first about how much the bridge project is contributing to the livelihoods of workers like himself, and introduced Governor Andrew Cuomo, mistakenly calling him by his father’s name, Mario. The Governor made a joke about not minding being called Mario, and spoke for a few minutes about the success achieved by his administration is getting the new bridge project underway after years of inactivity. The Governor introduced President Obama. 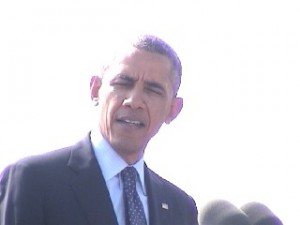 Mr. Obama warned that if Congress doesn’t act by the end of the summer to appropriate needed funds, federal money for highway projects will run out.

“There will be no money; the cupboard will be bare and, all told, nearly 700,000 thousand jobs would be at risk over the next year,” the President warned.

He chastised the Republicans in Congress for offering tax loopholes to the wealthy while killing off investments on projects which will create jobs and help the majority of Americans.

“We’ve got more than 100,000 bridges that are old enough for Medicare,” the President said. “We’ve got leaky pipes that lose billions of gallons of drinking water every single day…nearly half our people don’t have access to transit at all, and I don’t have to tell you what some of our airports look like,” he continued.

The President announced a plan to accelerate 11 infrastructure projects in cities around the country, and cut as much red tape as possible. He acknowledged Transportation Secretary Anthony Foxx who was in attendance, and who had warned that the Federal Highway Trust Fund could run out of money in August.

The President had flown in to Kennedy Airport on board Air Force One. Then, he was helicoptered to the former General Motors site on the Hudson River in Tarrytown where a motorcade drove him the short distance to the waterfront location of the speech. 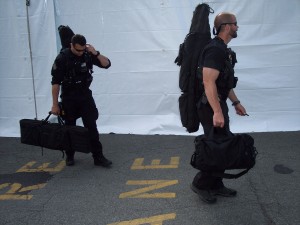 After the speech, the President spent a few minutes shaking hands and posing for pictures with people who were able to get far enough forward under the watchful eyes of the Secret Service.

Then, a motorcade took him back to the GM site where he was helicoptered to Manhattan where he was scheduled to attend two Democratic fundraisers tonight and the dedication of the 9/11 museum tomorrow.

His speech ran 17 minutes and he was in Tarrytown for an hour. Spectators gawked at the President’s limousine as it made its way in to the site. Members of the  Washington Irving Boat Club, guests of the President,  observed below 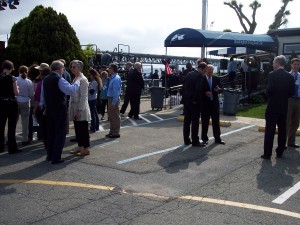 The entrance to the Washington Irving Boat Club. Mayor Tom Roach of White Plains is at the far right. 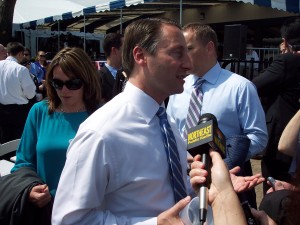 There were some Republicans in attendance, such as Westchester County Executive Rob Astorino . Construction workers who are working on the new bridge and officials of the Thruway Authority also were on hand. 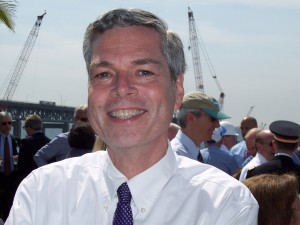