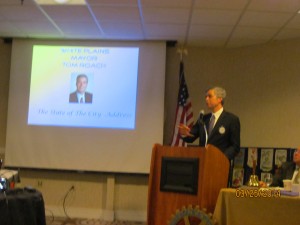 White Plains Mayor Thomas Roach attracted over 50 Rotarians and guests to Tuesday’s meeting of the White Plains Rotary Club at the Crowne Plaza.  Using a mixture of folksy self-deprecating humor and very positive developments starting to unfold, entertained and informed painting a positive “State of the City.”

He closed his 30-minute talk saying the city’s new “AA-1 Stable” bond rating, showed that the city staying within Governor Cuomo’s tax cap and sticking to its money-saving endeavors has created an environment businesses were looking at seriously. 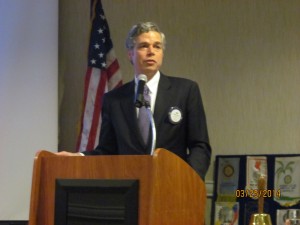 “White Plains is number one. There is not one developable or vacant property that is not being looked at,” he said. “We are the kind of environment businesses want.”

He talked in tantalizing candor on these city development issues:

He lead off with interesting developments coming out of his service  on the Governor’s Mass Transit Task Force.

He said  the force discovered  the majority of commuters from Rockland County do not commute to New York City, but commute to Westchester. This convinced the Task Force that  a rail link across the Tappan Zee Bridge and across Westchester County would not only not be used, but a rail link was cost-prohibitive.

Roach said that the Task Force determined that,  to build commuter rail across Westchester County, a tunnel would have to be built under the Town of Greenburgh and would cost millions.

The Mayor commented that in order to commute by rail to Stamford, the Rockland resident now has to take a train south to 125th Street and change trains to travel to Stamford. The Task Force, he said, saw that Bus Rapid Transit with modern buses, a station-based ticketing system with no fare box on the bus, and frequent buses was more practical and could be used in conjunction with the Westchester County Beeline System.

The plan: to skirt the Route 119 bottleneck into White Plains

Roach said that the Task Force recognized that running the Bus Rapid Transit system along the Route 119 Corridor had its problems. He said he advocated to the Task Force a traffic “Connector Corridor”  to be built through the County Parking lot at the County Center (bypassing the rush hour traffic that bottlenecks Route 119) coming into White Plains perhaps under the tracks.  He reported the Task Force was at this time positive about his suggested approach.

Roach said the city was in the first stages of beginning a feasibility and possibility study using the state $1 Million grant given the City of White Plains to study development around the White Plains Railroad Station. The study would gather ideas about what White Plains citizens want. He noted, too that White Plains is the number one destination out of New York City during rush hour.

Roach expressed concern that when the new Tappan Zee Bridge is built, unless the daily rush hour jams on I 287 eastbound in mornings and westbound evenings were addressed the new bridge would not be effective. “Traffic starts in White Plains (on I-287),” he said. He said the state is aware of this reality, but has not said how they plan to alleviate it. He points out that even with the 4 lanes eastbound from the new Tappan Zee Bridge, those 4 lanes still would have to hit the wall of traffic of the three lane eastbound I 287 and merge. 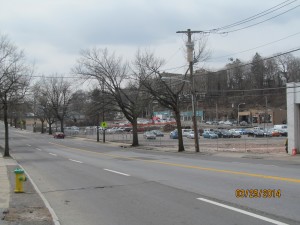 Site of the Grid Properties planned development (in process of being designed). Townhouses, the Mayor said are planned for the North side of Maple Avenue (foreground) and the retail mall would be the farside of the triangular property fronting West Post Road.

The Grid Properties Plan for the West Side on W. Post Road and Maple

The Mayor took on the mystery Grid Properties development currently being tweaked by the Grid organization.

The Mayor said at this point extensive retail would be built on the West Post Road side of the triangular former Sholz property, and would be relieved by a string of townhouses to front on Maple Avenue – no idea on how many, how the parking would be. The Mayor said his philosophy is to give the close-in neighborhoods  adjacent new developments  development “that would enhance them.”

Mark Weingarten, of  DelBello, Donnellan, Weingarten, Wise & Wiederkehr speaking for Grid Properties, asked by WPCNR to confirm the commitment to townhouses on the site with the retail, gave this written statement:

Again, no final decisions have been made as of today. Our client has drawn up many different scenarios for review and analysis. When our client is ready to share its vision with the City and the public, we will inform you. 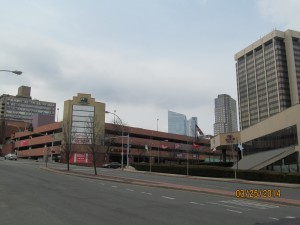 The Mayor told Rotary, the owners of the Pavilion are requesting a zoning change for mixed use to redevelop the site.  He noted the zoning change has not been approved by the Common Council yet.

However, the Mayor told Rotary about a design that would have a threshold reminiscent of Rome’s Spanish Steps leading up from the Crowne Plaza Hotel that from the sounds of it would be totally unique in the metropolitan area.

On the north side of the steps, Roach said would be a series retail and restaurants, perhaps at the top of the steps a hotel, and fronting on Maple Avenue would be residential buildings, he said would compliment the new apartments going up on DeKalb. The idea appeared created a buzz in the audience.

Mayor Roach told Rotarians that the Cambria Suites hotel going up on Main Street, is scheduled to be finished in June, and would contain a Japanese Steak House and a Chipotle Grill in the hotel itself.

Mayor Roach said the city was close to holding a groundbreaking for the first building of the Winbrook Revitalization (which currently continues to be picketed by the Brotherhood of Operating Engineers, protesting the  use of  non-union labor being used by Jonathan Rose, the developer, work continues). Roach said the complex continues to be seen as a mixed use project with retail and businesses on the Lexington Avenue side, and the new residences being of mixed incomes.

In the question and answer period that followed, the Mayor said the French American School of New York site plan for the former Ridgeway Country Club is being awaited by the city, and after it is received new public hearings on the site plan would begin again.

He did not mention any details of the 2014-15 city budget that is due the first week in April and was not asked about it.