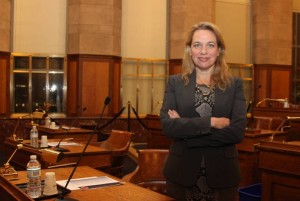 WPCNR COUNTY CLARION-LEDGER. From the Westchester County Board of Legislators. January 7, 2013:

Catherine Parker, a Rye City Councilwoman since 2007 and a small business owner with a long résumé of community service, was sworn in officially Monday evening as a member of the Westchester County Board of Legislators (BOL). She will be representing the county’s 7th Legislative District, which includes the Town of Mamaroneck, Village of Larchmont and a portion of the City of Rye. The district was previously represented by Judy Myers, now retired.

“I thank all of the residents of the Seventh District for bestowing me with the privilege to serve them,” said Parker. “My experience in public life has taught me that party politics sometimes unnecessarily distracts us from our common purpose. We are at our better when we work together; and we are at our best when we do so with respect for one another.”

Parker added, “The challenges ahead are significant, and it’s important that we make real progress on a number of important issues, like lessening the tax burden on residents and business owners, protecting our environment and making proper investments in infrastructure improvements, including flood mitigation. I’m excited about working with all of my colleagues on the Board of Legislators in order to strengthen our communities for the future.”

First elected to the Rye City Council in 2007, Parker helped pass budgets that added to the city’s reserve fund and advocated for small businesses. Thanks to her efforts, the City Council passed a number of smart environmental measures. She also helped create the city’s flood action committee.

A fourth-generation Westchester resident, Parker resides in Rye with her husband David Walker and two children, Julia (12) and Aidan (6). For over 15 years, Parker has owned and operated a travel store in downtown Rye, which sells clothing and luggage. In addition to her public service, Parker is a member of the Rye Presbyterian Church, Rye Lions Club, and Rye Middle School Parent’s Teachers Association.