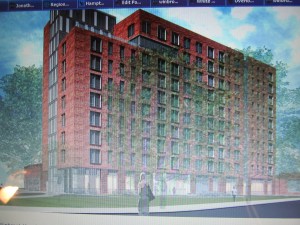 Windbrook Revitalization may begin shortly, as county mulls covering infrastructure to get it started after the project was proposed six years ago

WPCNR COUNTY CLARION-LEDGER. News From the Westchester County Board of Legislators (EDITED with research by the WPCNR staff). September 18, 2013:

The Winbrook Revitalization Plan dormant for about seven years is showing signs of life with Dattner Architects of New York, designers of the project for the Jonathan Rose Companies, projecting the first ten story building will begin construction, no date as yet, with completion set for 2015.

“The Westchester County Board of Legislators (BOL) advanced a significant affordable housing plan yesterday when the authorization for a finance agreement to assist the City of White Plains and the developer (a subsidiary of Jonathan Rose Companies, the original partner with Avalon Bay on the Revitalization Plan) was approved by the BOL’s Government Operations Committee, chaired by Legislator Catherine Borgia (D-Ossining).

“The authorization approved yesterday, when passed by the full BOL and signed by the County Executive, will allow the County to enter into an agreement with the City of White Plains and Winbrook Phase I GP, LLC, the developer involved in the project to finance infrastructure improvements in support of a 104-unit development to be known as Winbrook Phase 1. 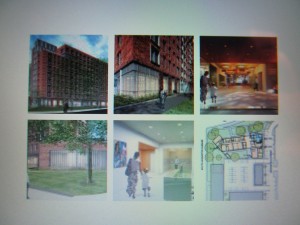 Editor’s Note:Winbrook Phase 1 GP, LLC  WPCNR  has learned is a subsidiary of Jonathan Rose Companies, the original partner with Avalon Bay  picked by the city to build the long delayed Winbrook Revitalization project that originally was agreed to by the city with HUD as the expected finance source during the Delfino administration years ago, originally touted as a mixed income development bringing gentrification to the area while rehousing the 450 residents living in the World War II built buildings presently on the site.A composite of the project and its location on Quarropas and South Lex is shown above from the architect website.

Editor’s Note:  Previously a Department of Housing and Urban Development grant was combined with a city commitment to begin the first floor with the community center has not begun yet. However, it appears that project is about to begin, as the architects expect it to be completed in 2015. It is not known whether the approximate $5 Million seed money is in hand.

As WPCNR reported last year:  The council approved the first step in the ongoing Winbrook Revitalization Project, approving a 10-story building,housing an Education Center , which will be built first, however funding is only available for the first floor housing the education center on the first floor. The city is funding $1.5 Million of the project and the Housing and Urban Development, $3,500,000 as of this spring. The Housing and Urban Development press office in New York confirmed to WPCNR, HUD is still funding the $3.5 Million “only for the education facility,” the spokesman explained.

During the 2012 hearing on the Winbrook project, William Null, the attorney for the enterprise said in response to a question by Council President Beth Smayda that plans for subsequent buildings in the project would be submitted on a project-by-project basis and built individually according to the individual’s financial model, and not as part of a connected project. Design, Null said would depend on whom the Housing Authority was working with to develop each building in the future, so, Null suggested that it was somewhat impossible to present the kind of comprehensive plan that Smayda suggested.

The architect for the project stepped up to say that the Authority had not applied for the financing yet, because it needed  approval to do so and would be applying to state agencies for tax credit financing after approval.  The Housing and Urban Development agency in Washington told the authority in the spring of this year (2012), its funds were no longer available for financing the entire project.

According to the architect, Dattner Architects on their website viewed this evening http://www.dattner.com/portfolio/winbrook-houses/#prev_image

The Winbrook Housing Revitalization Master plan was developed for the City of White Plains and a private developer, and through a phased implementation will replace the aging, existing housing stock with a new, sustainable, mixed-income and mixed-use development. The first building will be located along Quarropas Street. The 121,000 square foot building will include a 13,500 square foot community facility emphasizing job training and other City programs.

The programs spaces will be independent, with separate entrances, service access and utility metering. The residential portion will be designed in accordance with NYS Homes and Community Renewal standards and will meet Enterprise Green Communities and NYSERDA requirements. The clients have challenged the team to distinguish the project from “typical public housing” and make an important urban statement.

The Board of Legislators news release said “This project actually involves the redevelopment of the Winbrook Public Housing Complex, originally built in 1949 and located at the southeast corner of Quarropas Street and South Lexington Avenue.

“Currently, the plan is to construct 103 fair and affordable housing units, plus one set aside for a superintendent, in a single ten-story building along with 23 parking spaces. Once the new development has been completed, eligible tenants from the existing buildings can move into the new units and the appropriate older buildings will be demolished.

“Infrastructure improvements for the redevelopment totaling $1,140,000 will come from the County’s Capital Project Housing Implementation Fund, and will finance sewer and main replacements, curbing, paving, parking, lighting, grading, landscaping and ancillary work related to the project.

“While it’s important to continue our efforts in increasing the number of new affordable housing units in Westchester, my colleagues on the Board of Legislators also know that existing housing stock along these lines, used by seniors, veterans and young professionals, is aging and needs ongoing attention and care,” said Borgia. “Here, a developer has stepped up to help partner with the County in maintaining a number of units in White Plains, and this is the kind of collaboration that deserves our encouragement and support.”