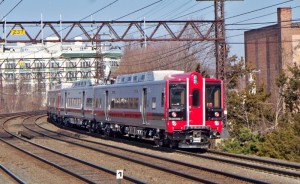 WPCNR ALBANY ROUNDHOUSE. From the Office of Governor Andrew M.Cuomo.September 19, 2013:

Governor Andrew M. Cuomo announced Wednesday the board of the Metropolitan Transportation Authority (MTA) has approved a contract with Kawasaki Rail Car, Inc. for up to $1.83 billion to design and build the next generation of rail cars for the Long Island Rail Road and Metro-North Railroad.

The MTA expects up to 676 cars will be assembled at Kawasaki’s plant in Yonkers
and anticipates up to 1,500 people will be employed in New York State.  The initial contract will provide 92 cars to the LIRR. If funding is available in the forthcoming 2015-2019 MTA Capital Plan and the railroads choose to exercise future options, Kawasaki will manufacture up to 304 additional cars for the LIRR and up to 280 cars for Metro-North.

“We have been constantly working to improve the state’s infrastructure and transit systems to better serve New Yorkers,” said Governor Cuomo. “This contract will not only make the Metro-North and LIRR more efficient and resilient, but the additional cars will be assembled right here in New York,
helping create jobs and grow the regional economy. I thank Kawasaki Rail Car for their partnership and look forward to seeing further upgrades to our mass transit system.”

The cars will be used to replace 1980s-era M3 railcars that serve the LIRR’s eight electric branches and Metro-North’s Harlem and Hudson Lines and to expand fleet capacity for both railroads to allow for ridership growth. A portion of this contract and related development costs are funded with $355.5 million from the MTA’s 2010-2014 Capital Plan.

The cars will incorporate the most successful and popular features of the railroads’ two recent electric car classes, the M7s that serve the LIRR and Metro-North’s Harlem and Hudson Lines, and the M8s serving Metro-North’s New Haven Line. The cars will have larger windows than the M3 cars they are replacing, automated public address announcements in car interiors and exteriors, and single leaf doors for improved reliability. They will also continue the M7/M8 configuration
for heating, ventilation and air conditioning systems that has proven to be more resilient in extreme weather and more effective at providing customer comfort in all types of weather conditions.

“I am happy to congratulate Kawasaki Rail Car on winning the M-9 contract,” said Senate Democratic Conference Leader Andrea Stewart-Cousins. “I have had the privilege of working with Kawasaki since they moved to Yonkers. Their presence supports the regional economy and sustains
hundreds of jobs in the City’s downtown. These are some of the reasons why I am proud to support them and look forward to many more years of partnership.”

Assemblyman J. Gary Pretlow said, “This contract is good news for our state. With its highly
reputable track record as the MTA’a leading and trusted supplier of new subway
cars, riders who rely on Metro-North (and the LIRR) can be assured that the
safety, reliability and efficiency of the M9 rail cars will enhance their daily
commute. I am thrilled that Kawasaki Rail Car, Inc. will continue to serve the
constituents of Westchester County, New York City and Long Island.”

“While we spend a lot of time and energy modernizing our railroads’ aging infrastructure, few
improvements are more visible and more welcomed by customers than updating our
trains,” said MTA Chairman and CEO Thomas F. Prendergast. “Our last major joint
railroad car procurement produced highly dependable trains that have helped
improve our On Time Performance and are providing years of reliable and safe
transportation. We anticipate that this latest update to our fleet will produce
the same positive results.”

As with railroads’ previous electric car classes, the majority of cars under this
contract will be manufactured as “married pairs” comprised of two nearly
identical cars permanently coupled together and sharing a restroom, cabs for
engineer or conductor, and electrical systems. Each pair is designed to seat 221
passengers, eight more than the M7 pairs.

The MTA benefited from robust competition for this contract. The MTA, with the LIRR
acting as the lead agency, initially advertised a Request For Proposals (RFP)
for the cars in June 2012. Twelve carbuilders received initial RFP packages from
the MTA containing technical details of the cars. After initial consultations,
the MTA determined that six of them were qualified to submit initial price and
technical proposals, and three ultimately did so. Best and final offers from
each of the responding carbuilders were received in August 2013.

The proposals for the contract were evaluated on a host of financial and technical
criteria, including price, percentage of New York State content going into the
cars, and the percentage of U.S. domestically produced steel used in the cars.
The winning proposer, Kawasaki, provided the most attractive pricing.

The M3 cars being replaced by the M9 cars entered service between 1984 and 1986. Upon their retirement, they will have served the region for more than 30 years.