WPCNR PHOTOGRAPHS OF THE DAY By the WPCNR ROVING PHOTOGRAPHER. September 18, 2013:

The Cardinal spoke glowingly in a truncated (not by the Cardinal) three-question news conference that enrollment in parish elementary schools had stabilized, consolidated and has retained 2/3 of parish school students who have transferred to other parish schools.

He said the Archdiocese was growing and planned to reach out and grow it more through Twitter, Facebook and social media by delivering what he called “Evangelization,” the Archdiocese word for marketing. “We have the greatest product,” he said, “Salvation.”

Cardinal Dolan has the easy-going sincere matter of the great religious figures and leaders of our time, delivering a patina of leadership, that brings out the best in persons he talks to and he knew so many Stepinac leaders by name. His was a virtuouso performance in positive, footsteps-to-follow-in inspiration. Here is what it looked like: 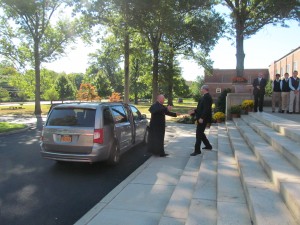 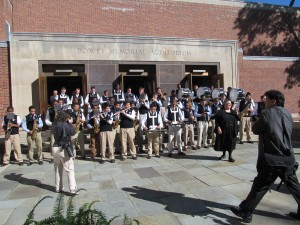 The Cardinal took to compliment the band saying they made him feel so welcome! 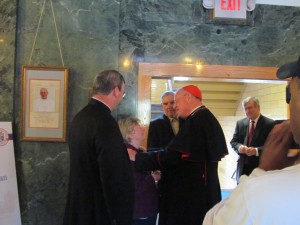 After greeting Mayor Thomas Roach of White Plains, the Cardinal greeted the mother and father of Father Collins in a warm and sincere manner seldom seen by this reporter. He treated everyone as special and established just an atmosphere of good will and hope and excellence I have rarely seen in public appearances 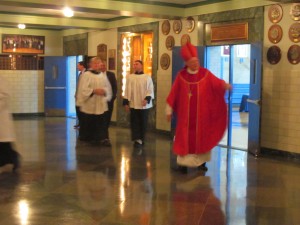 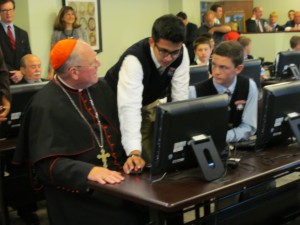 His Eminence proceeded to the new digital library, where he was stunned to see textbooks for Latin on line brought up at the touch of a button. He called the capabilities demonstrated by his mentors, “phenomenal.” He asked Father Collins how Stepinac has this kind of digital library and others don’t, and Collins without hesitation said, “We’re smarter,” which cracked up the Cardinal and all in the lab. The Cardinal was shown how homework is turned in via student laptop, how textbooks are pulled in by laptop  by Harris Ali, center and Liam Butler, students of Archbishop Stepinac High School in White Plains. The Cardinal was an avid learner. 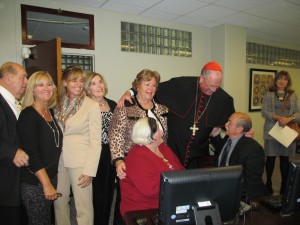 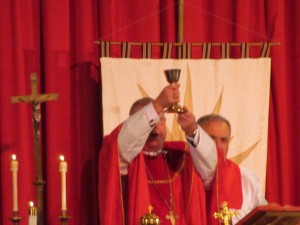