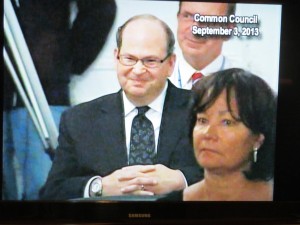 Lloyd Tasch, at the Common Council meeting last evening where he was approved for a second six-year term as City Assessor.

With Mr. Tasch’s entire department looking on last night, Mayor Tom Roach lauded Lloyd for running his department efficiently and conducting a very difficult job with an unusual sense of humor. Mayor Roach Mr. Tasch joined the city in 2002 as an assistant Assessor, and was chosen Assessor in 2006 (after the departure of Eydie McCarthy to the Town of Greenburgh).

Councilman John Martin, a member of the City Assessment Review Committee commended Mr Tasch for being effective, professional and poised and earning the respect of his colleagues throughout the region.