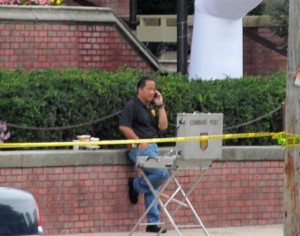 Six days, after the murder of  Michael Solomon, 68, a night watchman on duty at the YMCA front desk last Saturday morning, the 15-year resident of the White Plains YMCA who police stabbed Mr. Solomon to death was identified Friday by the Westchester County Medical Examiner as Eddie Diop, as residents of the Y had originally told WPCNR the morning of the murder, followed by Diop’s suicide.

Commissioner of Public Safety David Chong gave a statement to WPCNR Tuesday afternoon on the status of the YMCA murder-suicide investigation. Asked about details on what substance ignited the fire the suspect, tentatively identified as Eddie, used to set himself on fire, the Commissioner said the police are awaiting results from the crime lab. He also detailed the extent of damage to the two rooms the suspect set aflame, but declined to release police pictures and the police report is not available as yet. The Commissioner’s written statement:

“We are 95 percent sure that the suspect is the resident of the room that was set
on fire and that he committed suicide. His remains are being studied at the
medical examiners office. We are not actively looking for anyone else as we have
conclusive evidence on who committed the homicide.

The room was set on  fire with some sort of flammable material yet to be determined by the crime lab.

The major damage is to two rooms on the third floor with a wall collapse between
the rooms most likely due to the intense heat.

We will not release any name until we are 100 percent clear on the identity. This may take some time.

The displaced residents are back at the YMCA and the City is working with the YMCA to get them back into their private rooms as expeditiously and as safely as possible. ”

Incidentally, Richard Liebson of The Journal News notes that 11 Chinese, Vietnamese and South Korean students visiting White Plains to attend Archbishop Stepinanc High School this year who were being housed at the YMCA Saturday were also displaced and have been staying at Good Counsel Academy and Berkeley College in White Plains since. Liebson reports they and the rest of the students will be back in the Y tomorrow.

Michael was a loved member of our YMCA family for 25 years. We are shocked and saddened by this tragedy our thoughts and prayers are with his family, friends and YMCA community.

We wante…d to share the funeral arrangements information as well as provide you with a link to Michael’s obituary:

Visiting hours are Friday from 5-9PM at the Ballard-Durand Funeral Home, 2 Maple Avenue at South Broadway, White Plains. The funeral mass will be held at 10:30AM Saturday at Our Lady of Mt. Carmel Church in Elmsford.