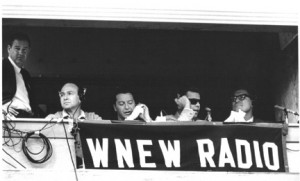 iT’S GOOD! LIKE NEDICKS! MARTY GLICKMAN, SECOND FROM LEFT ON A WNEW NY GIANTS BROADCAST FROM THE PAST. GLICKMAN’S HBO BIOGRAPHER IS INTERVIEWED ON BEYOND THE GAME THIS EVENING AT 9 P.M.

Before Marv Albert and Bob Costas, there was Marty Glickman. A gifted Jewish-
American athlete who was denied the chance to represent the U.S. at the 1936 Berlin
Olympics, he went on to become one of the most revered and influential sportscasters in
history, pioneering many of the techniques, phrases and programming innovations that are
commonplace in sports reporting today. Chronicling his remarkable life and career,
TONIGHT, Aug 23rd  at 9:00p.m.White Plains Community Media’s BEYOND
THE GAME (Cablevision 76; Verizon Fios 45; & www.wpcommunitymedia.org)
will feature GLICKMAN, writer, producer and director James L. Freedman. BEYOND
THE GAME host John Vorperian said, “As a high school senior James Freedman
produced Marty Glickman’s late-night NYC sports radio program. GLICKMAN is
Freedman’s first documentary, but clearly his film illuminates the life and legacy of the
man who pioneered modern sports reporting.”
WPPA viewers who wish to see more about GLICKMAN prior to its HBO
Monday, August 26 premire can visit: www.glickmanthefilm.com
GLICKMAN debuts MONDAY, AUG. 26 (9:00-10:30p.m.)  exclusively on HBO.