The Gedney Association is calling for the city to schedule new hearings  to examine in depth 2 new alternative entrances to the proposed new French American School of New York campus (under review for 2-1/2 years) outlined in the Draft Final Environmental Impact Statement now being considered by the Common Council. 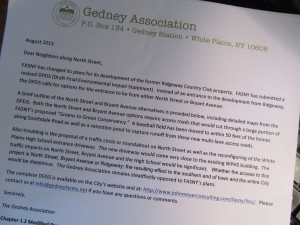 Residents up and down the North Street corridor (that we know of)this afternoon received a letter and copies of the proposed new entrances and were urged to write the Mayor and Common Council demanding scheduling of new hearings, encougaging them to send a letter saying:

“Because of substantive changes to FASNY’S FEIS, I think additional public comment and hearings are warranted.” 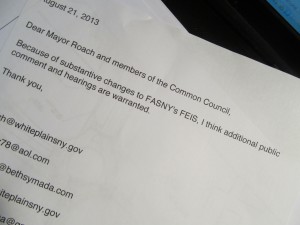 Geof Thompson, spokesperson for the French Amercan School of New York, asked if the new proposals were developed with the city planners and departments, told WPCNR  FASNY has spent the last five months working with city officials on answering some of the questions raised from the previous Draft Environmental Impact Statement hearings. Asked if FASNY was under the impression that the proposed new entrance routes were city professionally acceptable solutions developed by the FASNY consultants and planners as a result of this deliberation process, Thompson said he would have to check with the French American School of New York.

Thompson contacted WPCNR moments ago to clarify that the DEIS hearing testimony and comments called for studying alternative entrances at either North Street or on Bryant Avenue as issues to be addressed.

John Callahan,  city Corporation Counsel,   speaking to WPNCR this afternoon confirmed that the two new entrances were developed with city officials and planners working with FASNY consultants. Asked if the city professionals on staff had indicated to FASNY these were acceptable alternative solutions to the traffic problems alleged to be created by the previously proposed Ridgeway Avenue entrance, Callahan said he had not participated in the meetings. Asked if the city recommended these solutions, Callahan said it was up to the Common Council to decide that.by either approving or denying the project.

Callahan said as Corporation Counsel he was not in a position to judge whether a council denial of such solutions would be defensible legally, until any such suit should arise. Again, he pointed out he was not at the meetings where the city and the FASNY consultants worked out the proposed alternative entrances

The letter from the Gedney Association received by residents in the North Street area today, read, in part, “Instead of an entrance to the development from Ridgeway, the DFEIS calls for options for the entrance to be from either North Street or Bryant Avenue.”

The proposed entrance on North Street would at the entrance to the White Plains High School, and be in a roundabout, traffic circle design, allowing flow without a traffic light. 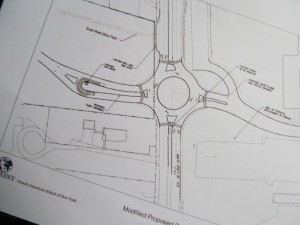 The suggested entrance on Bryant Avenue would have a traffic signal allowing turns into an entrance road cutting south from the golf course to the campus.

THE ENTRANCE TO THE PROPOSED NEW FASNY RIDGEWAY CAMPUS THAT WOULD HAVE TRAFFIC ENTERING AT A TRAFFIC SIGNAL ON BRYANT AVENUE AT TOP OF PICTURE.

The Gedney Association opposes each solution.

The complete DFEIS in on the city website at http://www.johnmeyerconsulting.com/fasny/feis/