WPCNR NewsReel. From WP Little League.June 27, 2002. The White Plains Little League reports the electronic scoreboard at the new Gedney Field was vandalized sometime over the weekend.

According to the Little League’s report, when the scorebard activated Monday evening, it would not operate. Harvey Sommer, White Plains licensed electrician was called by Little League to investigate.

Sommer identified the problem: someone had cut the main power wires to the scoreboard in the center field area. An official police report was filed.

Anyone with information on who cut the wires is asked to contact the White Plains Police Department.

THE STORM PREDICTION CENTER HAS PLACED PART OF THE TRI-STATE AREA IN A SLIGHT RISK FOR SEVERE THUNDERSTORMS FOR LATER TODAY.

A VERY WARM AND HUMID AIRMASS CONTINUES ACROSS THE REGION. AN APPROACHING DISTURBANCE…PLENTY OF LOW LEVEL MOISTURE AND INSTABILITY WILL SET THE STAGE FOR SCATTERED SHOWERS AND THUNDERSTORMS BEGINNING LATE THIS AFTERNOON.

WPCNR Police Gazzette. June 25, 2002. 8:00 AM. Dr. Frank Straub, the Mayor’s nominee to become the next White Plains Commissioner of Public Safety was interview by the Common Council in Executive Session Monday afternoon.
Dr. Straub was seen leaving City Hall at about 7:10 PM, and Council President Benjamin Boykin told WPCNR that he found Dr. Straub “very impressive.” Councilman Boykin said he could not comment further about the directions of the Executive Session interview with the NYPD Assisstant Commissioner, but Dr. Straub’s appointment would be on the agenda for next Monday’s Common Council meeting.

WPCNR Morning Sun. By John F. Bailey. June 25, 2002. 8:00 AM E.D.T. Prior to voting to accept the New York Presbyterian Hospital draft Final Environmental Impact Statement early this morning, Councilpersons Benjamin Boykin and Rita Malmud were strong in their assertion that not enough clarity had been provided by the hospital in their supplmental information provided last Thursday.
Prior to entering into historic Executive Session, Common Council President Benjamin Boykin and Councilperson Rita Malmud said the hospital supplemental information on the nature of research and the number of trees to be destroyed on Site 8 was not detailed enough.

Gerrard says detail not needed in FEIS for it to be accepted.

Michael Gerrard, of Arnold & Porter, the environmental law advisor agreed, saying – “This (the Section 2 answer) is not quite adequate.”

However, Gerrard said it was not enough reason to reject the FEIS as incomplete. He suggested instead that it gave the city cause to create “a procedure for the city to review the research,” as the hospital developed potential research projects for the biomedical complex. “This is not needed to be in the FEIS,” Gerrard concluded.

When Councilman Glen Hockley asked for clarification, Gerrard said, that as part of the Findings statement,

“The Common Council shouls set guidelines for what ancillary means, and what research you will allow to go forward.”

WPCNR City Evening Star Reporter. By John F. Bailey. June 25, 2002. 12:15 A.M. E.D.T.: The Common Council started deliberating in Executive Session with their environmental attorney, Michael Gerrard, Monday evening at 8:40 PM and at midnight were still at, wrangling over their options. As of midnight, no public vote had been called on the resolution as to whether the Council would accept the New York Presbyterian Hospital Final Environmental Impact Statement.

At 12:10 AM, Tuesday morning, George Gretsas, the Mayor’s Executive Officer, reported to WPCNR that the Common Council had accepted the Final Environmental Impact Statement as complete by a vote of 6 to 1, with Councilman William King abstaining. 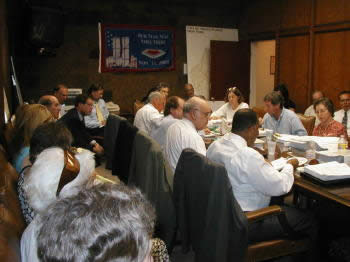 In what was billed as the final session of the “Gerrard Talks,” the council got under way with Mr. Gerrard at 7:27 PM, and adjourned to Executive Session at 8:40 PM to get into the hot and heavy issues.

Based on the concerns expressed repeatedly over the first five sessions of the “Gerrard Talks,” WPCNR speculates they were discussing specifically how they could demand more information on the FEIS, and how they could limit the scope and execution of the New York Presbyterian Hospital project, or perhaps deny it all together in their eventual Findings Statement. Obviously after three hours in seclusion with Michael Gerrard, the Council feels comfortable with their options.

Resolution Drawn Up for Public Voting.

The Common Council was required by the Department of Environmental Conservation State Environmental Quality Review regulations to accept as complete or deny as incomplete the Final Environmental Impact Statement by Thursday, June 27. Consequently a 4-page resolution had been drawn up for Council action at the conclusion of the Executive Session for the Council to vote on which they approved at slightly past midnight.

The Resolution continues, acknowledging that the Council “accepts the FEIS for consideration in making environmental findings.”

On tap tonight will be exclusive photos of the Fortunoff Ground-Breaking, the location of the new soccer field in Saxon Woods Park, as well as a preview of the final round of the New York Presbyterian Hospital “Gerrard Talks VI.”

WPCNR NOON NEWS. Special from the Mayor’s Office. June 24, 2002. 11:45 A.M. E.D.T.: The Mayor’s Office is organizing a Common Council tour of the Entergy Nuclear Station at Indian Point, WPCNR has learned. Actual date of the visit has not been determined, however the trip is a “do.” Arrangements for media to accompany the Common Council at the fact-finding trip will be available.

The trip to the Indian Point facility is a serious Council effort to make an informed decision on whether or not to consider a resolution calling for the decommissioning of the plant.

WPCNR NOON NEWS. From Dept. of Recreation & Parks. June 24, 2002. 11:30 A.M. E.D.T.: White Plains Recreation announced this morning that the 2002 traditional White Plains fireworks will be held Wednesday evening, July 3 at White Plains High School.
The festivities will begin at 6:30 PM and continue to 8:30 PM, featuring live music by the White Plains Pops Band, children’s performers and a visit from Ronald McDonald, with refreshments provided by the White Plains Parent Teacher Association. The Pops Band will perform beginning at 7 PM, and at 9 PM Independence Day Ceremonies will begin, followed by the traditional fireworks under the stars on the High School grounds.

The extravaganza regularly attracts upwards of 10,000 persons. Parking is free.

The fireworks this year are being co-sponsored by Hudson United Bank, Heineken USA and the New York Power Authority.

WPCNR Environmental Enquirer. By John F. Bailey. June 24, 2002. 9:00 A.M. E.D.T. Concerned Citizens for Open Space, the grassroots White Plains association of environmentally sensitive citizens is planning on running a full page ad or ads in local media to demonstrate community opposition to the New York Presbyterian Hospital project.
The advertisement, WPCNR has learned, has been seeking signatures of White Plains residents, the names of whom will be printed in an advertisement, urging the Common Council to vote down the New York Presbyterian Hospital biomedical/proton accelerator project.

Citizens being approached are neighborhood association activists and concerned residents and names readily recognizable by the Common Council members.

The substance of the advertisement calls on the Council to reject the hospital project on the grounds that it violates residential zoning now in place on the property, desecrates open space that could be used for a park, and that the project itself will create a negative impact on the adjacent neighborhoods. No organization other than Concerned Citizens for Open Space is mentioned in the ad, as far as our information indicates.

In a recently concluded WPCNR Poll which ran for two weeks, only 50 readers of WPCNR expressed opinions on this issue, which is surprising because WPCNR has a documented Webtrends readership of 2,000 daily visitors a month, and 10,000 page views.

In an earlier WPCNR poll on the very same issue, when 56 votes were cast, 57%, 32 persons said the biomedical/proton accelerator complex should be denied on Bryant Avenue, but moved to an interior location.

Twenty-two votes, or 39%, said the biotech center should be approved as proposed on Bryant Avenue. In both polls, the numbers asking for the project to be denied altogether were very low: 18% and 4%.

WPCNR Morning Sun. From the Bradley Press Office. June 24, 2002. 8:30 AM E.D.T.:The Harrison Democratic Committee has endorsed Adam Bradley, candidate for State Assembly in the 89th District, was overwhelmingly endorsed by Harrison at the end of last week. Bradley now has been endorsed by two key Democratic organizations in the southern end of the 89th District, and the Independence Party, in his attempt to primary incumbent 10-year veteran Assemblywoman Naomi Matusow.

Hughes added: “The Committee has been most impressed by Bradley’s knowledge and commitment to issues of concern to the Community, and we believe he will provide the kind of leadership we need in the State Assembly.”