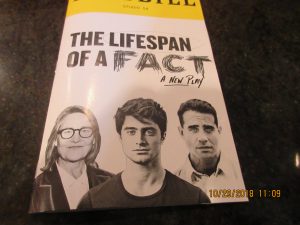 Whose facts are they anyway? Where and whom do they come from? Which facts do you choose when putting together a story?

Those are just some of the  “fact-ors”  in fascinating debate journalists, reporters, writers,  spokespersons and publicists need to consider.

The issues of fact and fake news is brought intellectually fascinatingly  to the lead column in the anguishing new play at the appropriately  antique Studio 54 Theater, in Jeremy Kareken, David Murrell and Gordon Farrell’s  The Lifespan of a Fact.

Conflicts  on truth in reporting ensnare the imperial Cherry Jones (Emily the crusading publisher),  Daniel Radcliffe (Jim the nag of an idealistic fact-checker) and Bobby Cannavale (the egotistical writer who bends, distorts and leaves out facts to his purpose) explode over just the facts ma’am.

The researcher played brilliantly by Mr. Radcliffe is mocked for his inexperience by the writer played byCannavale and treated with annoyance by the publisher (Ms. Jones), but when Mr. Radcliffe points out what the writer did not do (to verify facts) the impact of truth shows the way twisting or ignoring the truth for impact on the reader distorts.

The arguments that Cannavalle uses to justify his way of writing the story brought a smile to my face as I recognized expressions I used to use to justify copy I had written for lawyers and copy chiefs in the past. I have to tell you the script captures the back-and-forth of editorial wrangles spot-on.

The argument that develops into rage and exasperation as to whether or not to publish the article at all is fascinating, all too funny for such a serious subject, but the truth of the play will trouble you for sometime.

The whole idea of writing up composite characters based on real life people you meet in articles that present a conceptualized version of the truth to make a point was pioneered by new journalists in the 1960s. It destroyed the concept of who, what, when, why and where of reporting. Created the pseudo-anonymous source. Made writer’s judgement and interpretation popular. The new journalism was entertaining and much more exciting and entertaining than the facts. It even created the happy talk news format of the 1970s.

The discussion in The Lifespan of a Fact addresses the question:  is truth being changed by enhancing the facts to make a better story, or even changing the facts.

The answer is yes.

Truth is being changed when you distort or leave out facts. Based on the essay and book by John D’Agata and Jim Fingal, that came out of their experiences with an article they wrote for Harper’s it explores in entertaining and disturbing fashion how facts are manipulated.

The dogged researcher Jim argues that if you cannot support a fact mentioned in the story, you risk vilification on social media if it is ever found out, therefore subjecting the publishing house boss Emily (the imperious Ms. Jones) heads, for reputation destruction.

Writers make these decisions on facts all the time in what to put in an article and what to leave out. Or, worse, writers put their opinion into articles as to what certain facts mean and portend. This is so much a flaw in journalism today. It’s where fake news comes from.

Another tough call the reporter faces is what to leave out, such as questions politicians do not answer in a news conference. Reporting what is not said or answered is as much a part of a story as to what is said. And, of course there are the questions reporters do not ask.

The traits above are brought brilliantly, shockingly and hilariously to full glare in The Lifespan of a Fact.

The truth does not need interpretation.

The Lifespan of a Fact makes that perfectly clear through the three superb, chemical performances of three actors at the top of their game. The antiseptic imperious sets by Mimi Lien of the publishing house and the writer’s Las Vegas home will be very familiar.

The impersonal communication of the cellphone and the hell of dealing with issues that really do matter  face to face will make any writer or newspaper or network viewer think long after you see this play.

Not since The Front Page has a play explored the responsibility of reporters and writers and publishers with such insight. The truth is a harsh mistress betray her and you will regret it.

The instant on-your-feet standing ovation was testimony to the flawless performers mastery of timing, character, emotion — the stuff great acting is made of.