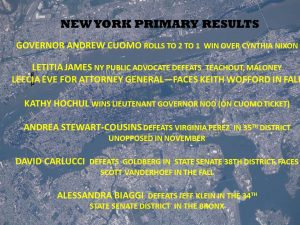 Governor Andrew M. Cuomo rolled up close to the 70% margin he wanted to solidify his positioning for the Presidential in 2020 Thursday, leading Cynthia Nixon, his celebrity challenger 66% to 34% of the vote as of 10 PM Tuesday evening.

The Cuomo candidate James’  margin over the popular Teachout, despite the New York Times endorsement appears to underline the feeling  among Democrats that Mr.Cuomo is doing a great job.

Meanwhile in the challenge of Westchester County Legislator Virginia Perez brought against State Senator Andrea Stewart-Cousins there was no contest. Cousins with 81% of the vote counted, lead Ms. Perez, 19,382 to 4,272. Ms. Stewart Cousins is unopposed for the State Senate District 35 Seat in November.

Big upset of the night is Alessandra Biaggi’s defeat of maverick Democrat Jeff Klein in the State Senate 34th district. Klein was the fence-straddling Democrat who lead the independent Democrats. Biaggi faces Kenneth Woffort, a lawyer in November.

David Carlucci, in the Rockland Westchester with a big turnout in Rockland defeated Julie Goldberg in a close contest. However he faces the popular Rockland County Executive Scott Vanderhoff on the Republican Ticket in November. No cakewalk for Mr. Carlucci.

Counts were hard to come by on the local news outlets tonight.

The only inside coverage with numbers was by News 12 who had reporters at the headquarters and they had the early returns on the lesser races first. Perhaps their best coverage they have done on a primary.