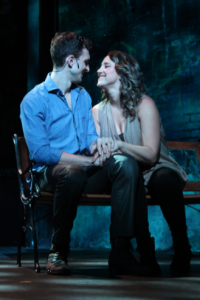 It’s got a contemporary Broadway Phenomette , Natalie Weiss of Dear Evan Hansen and Steven Douglas master of the male lead, Sam Wheat in the Ghost national tour, are a couple you will love at first sight, their chemistry is that good!

The lovebirds stir memories of how love feels when Ms. Weiss makes that old/new/feeling of first love stir irresistibly in fond memory with her technicolor voice effervescing and shining like diamond facets of emotions  in  composer Bruce Joel Rubin’s  show starter:

Here right now is where we make it

Everything we’ll ever need

…for once it feels like it was always meant to be

As long as we stat together,

We’ll just keep getting better till

It it really doesn’t matter what comes after or before

When I’m with you there’s

No confusion everything is clear

When we’ll have weeks

And months and years whatever

We were meant to be together,

You were sent to me forever

Makes me want to take Brenda Starr on a date. Wait until you hear Ms. Weiss, as Molly the artist, sing it and Mr. Douglas playing Sam Wheat echo her lyrics standing up to Ms. Weiss’s consummate coloratura runs of new love’s heights in an intricate duet as  they  putter about their new Brooklyn loft. This song made me tear up, hopeless romantic that I am. 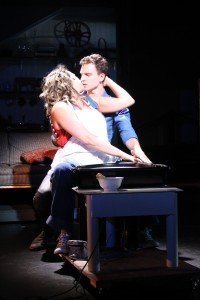 The devotedness of the couple is demonstrated when Mr. Douglas doo-wops Unchained Melody, the old Righteous Brothers’ close-dance classic. Mr. Douglas hits all the falsettos and the deep depths of bass with quiet desire of this classic song of longing. He masters the doo-wop style, and I know my doo-wop. His getting down on his knees just melts Molly.

Dropping by their loft apartment is the scene stealing Wayne Shuker as Sam Wheat’s righthand man in Mr. Wheat’s mutual fund businees, Carl Bruner.  Carl does everything for Sam, and wants to do so much more. Shuker gives the Bruner personality a J. Pierpont Finch attitude about him. Sycophantic, efficient, hard-working, offering to do more and more,so much more. (Finch is the conniving character in How to Succeed in Business Without Really Trying, the role that made Robert Morse famous.)

Morning in NYC:  the show steps it up with choreographer Lexie Fennell Frare’s intense rush hour scene of New York commuters, lead by Mr. Shuker (above, right) and Mr. Douglas in a syncopated, up tempo mass commuting scene that uncannily (this is an uncanny show)matches the exact pace of how rush hour commuters walk to their jobs in Manhattan and singing New York is not all romance and loft apartments:

This is the life New York

This is the time we’re given

Its fight or flight, New York

Cause it’s the way we’re driven

This is the score, New York

This is the destination

Where it takes more, New York

You need the right equation

…this is always such a brush

Sending millions with one touch.

As they prepare to go out that night, Molly suddenly broaches the idea of marriage to Sam in as it turns out is ironic but highly significant, she asks him if he loves her. He says “What do you think?” He sings:

I say it with my eyes,

When I hold you close at night,

When I make you scrambled eggs,

When I tell you silly jokes,

When I turn out the light.

Sometimes you need to hear it, Sam.

Or else you begin to fear;

Begin to fear it isn’t true

So I can really feel it,

So I can really feel it’s true.

I’d love to hear it everyday,

But even just this one time it’s OK

I can live that way

Then it’s night and Molly and Sam are coming out of an artshow late in the evening, when a stranger accosts Sam demanding his wallet. He tries to protect Molly. There is a scuffle. A shattering shot is heard. Shattering because Sam winds up in an emergency room and he is trying to communicate.

He doesn’t understand why he is ignored. He meets another ghost, Kenneth-Kyle Martinez whose comic You Gotta Let Go–timed perfectly–  informs Sam of his new status. He is between this world and his ultimate fate. 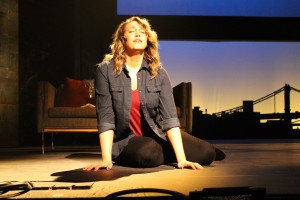 The ritual of saying goodbye is wrenching. Sam watches Molly (Ms. Weiss above) on his grave saying good-bye, but she cannot see him or hear him. A scene wonderfully staged by Scenic Designer Ann Beyersdorfer, and lit imaginatively by  Lighting Designer Matther Guminski. 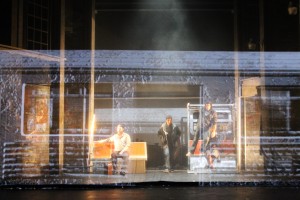 Sam wanders to Molly’s apartment via subway, the A Train which roars through the proscenium of the WPPAC in a startling moving three dimensional projection (with Sam and passengers appearing inside a moving subway car. It is an effect right out of today’s high-tech Broadway productions–one of the best manifestations of a train I’ve seen.

Projection Designer Ian McClain has created an ingenious, spectacular effect, Later Sam is taught how to move objects by a ghost who haunts the A Train, played by Greg Laucella who delivers a rap number Focus with a righteous style that tells Sam the secret of channeling all his  energies.

In his observations Sam learns why his wallet was stolen and learns Molly is in danger. He seeks out a medium to get a message to Molly. 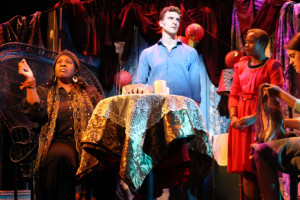 At the Psychic’s: Elisha Marie as Oda Mae Brown, left in a trance, with Steve Douglas as Sam Wheat trying to get a message through, with Jaela Cheeks-Lomax right as Clara Ms. Brown’s assistant and Chloe Kostman, a customer trying to locate her husband.

Then the link to Molly appears in the outrageously over-the-top,show-stealer Elisha Marie as Oda Mae Brown, psychic healer, who uplifts the spirits with the funky Are You a Believer? She and Kenya Hamilton and Jaela Cheeks-Lomax as her assistants Louis and Clara  send up The Pointer Sisters with this choreographically inspired song extolling the virtues of psychic exploration into the unknown.  Elisha Marie starts to conduct a séance and hears a voice in her head, the voice of Sam Wheat.

Act II finds Molly dealing with her loss of Sam, and her show-stopper anthem beginning of her comeback from loss, Nothing Stops Another Day, acknowledges Sam, celebrates what they had and Ms. Weiss commanding all-in commanding way of wrangling the most out of lyrics lifts you up when you feel the light of her healing voice:

And so I locked myself away

Padding my heart behind a wall

I couldn’t feel it beat at all

But I’m feeling it today

Because the world keeps turning and I guess it always will

I can choose to turn around,

Or I can choose to just stand still

Either way, nothing stops another day.

I now I have to let go

Of a life I’ll never know, hard as it may be

I’m trying to understand instead there’s another life ahead.

Sam meanwhile becomes aware of why he was killed.

With the help of the comic, incredulous Oda Mae Brown, he keeps digging

Ms. Marie’s Oda Mae is reluctantly the assistant detective who unravels the mystery of Sam’s fate and ultimately lifts the lovers to an understanding, where both accept their fates in a way that sends the audience home renewed in spirit.

Ms. Marie busts a ,move that has the audience clapping along when she sings about a coming windfall, in I’m Outta Here!  Ms. Marie’s perfect moves and timing as well as phrasing just sells this great number.

Ghost was a movie in 1990, based on the 1987 Wall Street scandals and was very popular :it was turned into a musical in Great Britain, ran in the West End and came to Broadway and went on national tour.

It is a great Halloween show. Romance. Mystery. Ghosts—lots of them.  Laughs even more. Heartbreak healed. The surreal spiritual stylings of Natalie Weiss, whose acting is as good as her ability to move you with her sublime voice that fills the theatre, gets you deep, draws you into feelings you do not feel very often. Perhaps once in a lifetime, if you’re lucky.

Ms. Weiss has according to the producers always wanted to do the role of Molly in Ghost, and based on the performance Sunday, it’s her part.

The show doesn’t have one great Molly, but two.

The other is Molly Seidel, Custume Designer for the show  whose inspired and accurate creativity in costuming the 1980s, contributes to the menace of the Subway Ghost and the mugger, makes the scenes so much more real. She dresses Wall Street: the attache cases, the gray suits with the thin ties, the clean-cut look, the sickening conformity and sycophancy and dripping greed of Mr. Shuber’s “Carl,” the menace of money is awesomely styled. Wall Street Sharks swim swindlingly through the canyons of Manhattan in the More, More, More  extravaganza thanks in part to Ms. Seidel’s haberdashery. Ms. Seidel is a White Plains High School graduate of 2007, art school graduate, who now lives in Brooklyn and she designs shows.

Joseph C. Walsh I believe has probably done the best directing job of any show WPPAC has produced, including his own. He has the actors’ timing down, attitudes natural, emotions raw, and special effects executed perfectly and fast insync. Lighting, choreography, staging , scenery as real as it gets. I think he will probably tell it’s his best show ever. He may never equal this one. He should savor it.

It will send you to Heaven.

Note from God: I note that WPPAC has added a matinee on Thursday, October 18, tomorrow at 2. Call now…your seat is waiting.