↓
Home Menu ↓
Home→A Call for the Man Who Made the Calls. Jack Lim, Umpire’s Umpire Heads to Elysian Fields 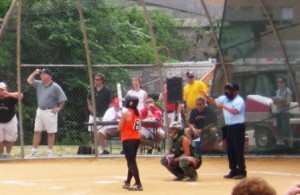 Jack Lim, behind the plate in the June, 2007 Sectional Championship. Jack passed away Monday.

The wake for Jack is Wednesday, August 30, 7 to 9 PM and Thursday August 31, 2 to 4 PM and 7 to 9 PM. at Heritage Funeral Home, Morrissey Drive, Putnam Valley. A Mass of Christian Burial will be conducted Friday, September 1 at 11 AM at Elizabeth Seton Church, Shrub Oak.

Jack Lim helped me a great deal to help me become a fastpitch softball umpire. When he discovered he had a very unusual disease. When he first learned he had the disease he determined he would walk the New York City Marathon to draw attention to the existence of this little know disease.

I interviewed Jack on November 2, 2008. Here is a reprint of that interview which also tells you about the umpire’s umpire, Jack Lim.

“One of the thousands who are running the New York City Marathon today will not be running.  He’ll be walking all 26 miles in support of a little known condition that he has recently found he suffers from: Idiopathic Pulmonary Fibrosis.

All the fastpitch coaches and players know him. He’s Jack Lim, the most good-natured, serious and conscientious umpire you’d ever want doing your game. He is past President of the Hudson Valley Chapter of the New York State Softball Officials Organization and has been a fixture behind the plate and in the field the 20 years in softball around the county. 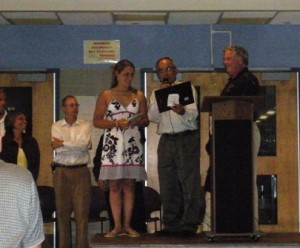 Jack wrote me and many he knows about his disease. He writes that he has decided to walk the marathon, “to bring some awareness to the lung disease known as Idiopathic Pulmonary Fibrosis and to raise some funds for the Pulmonary Fibrosis Foundation. My goal is to complete the marathon before it gets too dark.”

Jack explains that idiopathic pulmonary fibrosis, IPF, “is a slowly progressive lung disease that literally robs you of breath. There is no known cause and there is no cure.”

Jack though agreed to try some experimental treatments to help find not only a cure, but they also prolonged his life.

There is no cure.

“The disease,” Jack writes (in 2008), “generally occurs in individuals between the ages of 50 and 70 affecting about 250,000 persons annually in the United States. My primary doctor told me that I am the only patient whom he has come across in his 15-year medical practice with IPF. I am so lucky to have this honor. It is what it is. I got a medical all-clear for this past softball season and 2009 is looking good so far.”

How does he handle this spectre?

Like he handles beef from coaches over his calls:

“I try to take a positive attitude about life but don’t get over confident with anything I do. I sometimes have a great game, not perfect, behind the plate and then the next day, I am questioning myself over a call that I made on the bases. That’s life but it is still fun. Be well, and take care…see you in the spring. Play ball.”

All in the fastpitch softball community and the players who play know Jack.

His games are always a pleasure. He never shows anyone up, player or coach,  and is a hawk on every call and play, no matter what the score.

He shows tremendous energy in covering his position in the field, and his calls are emphatic without over-emphasis. He always has a smile and a quip.

But when he yells “Play Ball!” he is all business.

His strike zone is consistent, and in his games they move along and the game is the thing. He is so good at what he does that fans come away talking not about his strike zone or his calls, but what a great game it was. Players hit in the games he calls because he rarely is wrong on whether a pitch is a good pitch to hit (that is a strike).

The focus was never on Jack, which is what you want. There is such respect for his judgment he rarely gets arguments.

When I started out umpiring 10 years ago(2007) and in the first year lamented a couple of games I had, Jack put things in perspective for me:

“I’ve been umpiring for 7 years and I’ve never called a perfect game yet.”

That’s the kind of person Jack is.

He has a way that puts you at ease and makes you feel good about yourself with a new resolve. He had a way of taking the burden off you and turning you forward to the future. He never praised lightly. I remember I filled in on a varsity game when I was first starting, taking the field position. I made a “banger” call on a close play at first. Jack said after I made that call when we were coming in, “that was a varsity call.”

A little thing, but it meant a lot. Every Jack did meant a lot to him.

Like the game of ball itself, it’s not the last play, the last pitch, the last at bat, it’s your next play, next pitch, next at bat that counts!

It is a game Plato would have loved because you’re always moving along on the dialectic.

I kept this memory in the present from the time when I first wrote it. Because that’s how I’ll remember Jack. Having coffee in a diner with him. Talking ball. Concentrating on the next pitch, the next play, the next situation.

He is a class guy.