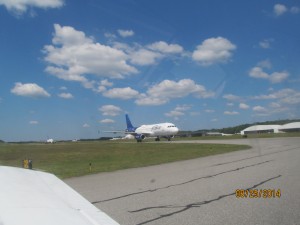 Westchester County Airport–Issue of the Year-2017 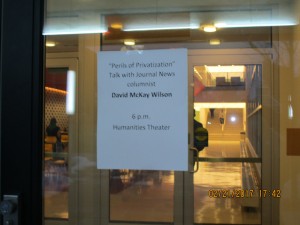 David McKay-Wilson, the Journal News columnist and Carolyn Cunningham, Co-Treasurer of the Federated Conservationists of Westchester County gave about 70 persons a comprehensive overview of the issues at stake as Westchester County prepares to lease its airport for 40 years.

The hour and a half comprehensive update unfolded at SUNY Purchase last night just as the county voted last week to hire a consultant for $550,000 to draft a new Request for Proposals for operation of the Westchester County Airport  to attract firms that  might offer the county “a better deal,” (as County Legislator Mary Jane Shimsky told WPCNR after the meeting).

Oaktree the giant investment firm the county originally negotiated a lease of the airport last fall has had the deal temporarily on hold by the Board of Legislators. 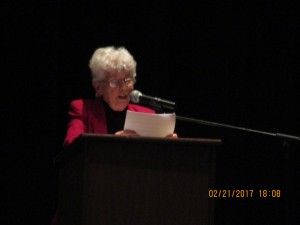 Ms. Cunningham (above) gave a comprehensive overview of the growth of the airport since 1984 when the limit of 240 passengers per half hour and voluntary curfews and noise control was put into effect through the efforts of the County Board of Legislators.

Ms. Cunningham expressed concern that the county could lose the right of approval of hours and traffic limitations in any new agreement with the Federal Aviation Administration, (the limitations have been in effect since 1984). She cautioned, “There is pressure today” (to increase air traffic) and changing any part of the law could be disasterous and it was in the county’s best interest “to keep direct control of the airport.”

Cunningham said the deal has been introduced without the County having completed their master plan for the Westchester County Airport. “To do anything (before the airport master plan is complete) doesn’t make any sense at all. It is bad policy.”

The Astorino Secret Deal to balance his $15 Million shortfall 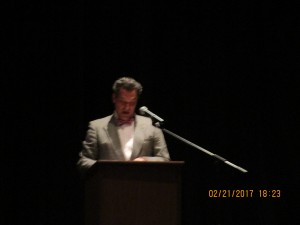 David McKay-Wilson, (above) the “Tax WatchDog” Columinist for The Journal News has been following the County Executive Robert Astorino-Oaktree deal since it was sprung on the County Board of Legislators last fall and informed the audience where the issue is now.

“The airport will be Westchester County’s Top Issue of 2017,” McKay-Wilson began. He said that Ms. Cunningham’s concerns about the environment and the 240 passengers a half hour restriction were legitimate concerns, but he focused on “how much money is at stake here. (The deal) is a boon to investors, wallet-emptying for travelers. It is selling a  public asset to keep his (Astorino’s) no tax increase “brand” intact. It also allows the county to get its hands on airport revenues (which stay with the airport under FAA rules).”

McKay-Wilson described Oaktree (the lone airport suitor so far) as a giant fund that specialized in “distressed debt,” purchasing troubled companies at a low price, and “flipping” them at the first opportunity. He said Oaktree received funds from 75 of the top 100 pension funds; 350 Endowment Funds; 400 corporations; and  38 of 50 state pension funds. (It is big).

He said, “Westchester Airport is not distressed, why are they interested in it?”

He said the Oaktree-Astorino deal was “a secret deal. It was not determined in an open process. It is front-loaded: $15 Million to the county in the first year; $5 million to the county each year for 4 years and $2 Million for 35 years. ($105 millon total).”

He theorized that if you paid $10,000 in county property taxes that would be a $300 increase. For the more realistic view, WPCNR points out if you pay $2,400 in county taxes as you do if you own a $650,000 median valued home in White Plains, and the county legislature raised the county tax 3%, this computes to a $72 tax increase.

He said the county has now hired a consultant for $550,000 to vet possible new applicants to lease the airport. The consultant is now formulating a new request for proposals.

McKay-Wilson noted that he has been informed the County Master Plan for the airport is now due in April. It was supposed to be in to the Federal Aviation Administration by December 31. His requests for a copy of the interim stages of the plan has not been met yet after numerous Freedom of Information Requests. Wilson said public input has not yet been taken for formulation of the plan though airlines and professional parties and government entities have been consulted. He believes that public comment would be taken in April.

McKay-Wilson said that Oaktree has plans to upgrade the airport with restaurants, which he questioned the need for.

Mr. McKay-Wilson pointed out that the big prize at the airport is the parking garage, which generates $10 Million in annual revenue.

The parking “take” is parceled out as follows: $4 Million is paid for debt service; $3 Million is paid to the county; and $3 Million to the owners of the garage. In 2024 the garage is supposed to go over to Westchester County. McKay-Wilson noted that once the garage goes over to Oaktree there is no telling what will happen to the parking rates. He observed the airport parking garage when it opened charged $11 a day in 1994. Today, twenty-three years later, it is $30 a day ($7.20 an hour).

McKay-Wilson noted that the $105 Million the county receives in the deal over 40 years paled in comparison to the $10 Million (and up)  the parking garage would generate over 40 years, ($400 Millon) and (potentially much more with parking rate increases).

McKay-Wilson advised Westchester to “fasten your seatbelts, make sure your gear is comfortably stowed beneath your seats, or the above storage racks, and enjoy your flight.” 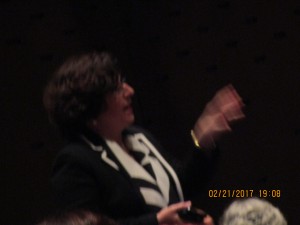 Mary Jane Shimsky, (above)of Hastings-on-Hudson of the County District 12, asked by WPCNR if the county board was willing to sell the airport, said that Oaktree had not provided all information the Board of Legislators had asked for, and therefore the board opted to furnish a new request for proposals to take over the airport to get a better deal.

During the meeting, she said the county was very concerned that the curtailment of flights (240 passengers able to load per half hour) covenant in effect since 1994 be agreed to in any final agreement approved by the Federal Aviation Administration, no matter what company leases the airport, if it is leased at all.