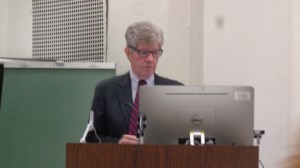 Timothy Connors shown in August 2016, during his last month of serving as Interim Superintendent of Schools filling in for Dr. Paul Fried. Connors is back to serve at least one month through March 21.

The Agenda just issued Friday for the White Plains School District Monday evening meeting announces that Timothy Connors who just left the school district as Interim Superintendent after filling in for the ailing Dr. Paul Fried (Fried resigned in December due to health reasons), will be hired again Monday evening to begin with for one month through March 21,  to replace Acting Superintendent Dr. Howard Smith, who started with the district in September. No reason was given in the agenda, for Dr. Smith’s departure.

Mr. Connors, after retiring from the district in 2009, has replaced Dr. Christopher Clouet for two years, (after Dr. Clouet left), and filled in as Interim Superintendent for Dr. Paul Fried, and now a third time beginning in 14 days, for Dr. Smith.

The District is in the midst of searching for a new Superintendent of Schools to replace Fried.

On the agenda is presentation of the proposed 2017-18 school budget, without instructional expenditures.