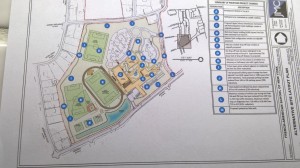 Another year has passed and yet regrettably the FASNY (French American School of New York) saga continues.   As many of you are aware FASNY filed a lawsuit against the City when it was unsuccessful in its efforts to have the City transfer a portion of Hathaway Lane to the school, thereby essentially killing their application for a massive school complex on the former golf course.  The City’s attorney put forward a strong preliminary defense and there was a general belief by legal observers that FASNY would not prevail.

As such it came as an enormous and disappointing surprise that the City’s Corporation Counsel, John Callahan, recommended a “Stipulation of Agreement” whereby FASNY would put its suit on hold if the City would consider a new plan.  FASNY said its “New Plan” would be for a smaller school of 640 students and a significantly smaller amount of acreage reserved for the so-called “Conservancy”, much of it comprising the undevelopable ponds, wetlands and watercourses.  The entrance to the school would be via Ridgeway which the City had strenuously rejected earlier.

The “New Plan” is in reality essentially Phase I of the earlier plan.  Phase II was always contingent on Phase I not exceeding traffic limitations imposed by the City.

The “Stipulation of Agreement” was put on the Common Council Agenda on the Thursday before the Labor Day weekend leaving almost no time for public notice.  Despite this City Hall was overflowing with residents opposed to the action.  Councilman Krolian offered a resolution to postpone any decision on the Stipulation for at least 30 days stating that there was not enough time to adequately review the matter affecting this major property.  Mayor Roach and Council members Kirkpatrick, Martin and Smayda without any discussion immediately denied his resolution and voted to enter into the Stipulation of Agreement with Council members Lecouna, Krolian and Hunt-Robinson voting against it.

If the above doesn’t concern you enough we also understand the City administration is formulating a plan, in conjunction with FASNY, to remove the parcel of land in which FASNY hopes to build from the City’s list of Environmentally Sensitive Sites.  Such an attempt would be a very transparent effort to get around the super-majority vote required for any such sites.  Incredibly, the “Stipulation of Agreement” requires the City to make such a decision prior to any Public Hearing on the “New Plan” thereby frustrating the public input and comment required under the State Environmental Quality Review Act (SEQRA).  Frankly, we will be shocked if the Mayor and Common Council supporters of FASNY follow through on this very questionable and risky attempt to de-designate part of the property.  We expect such a decision would ultimately be overturned.

The recent actions by the Mayor and Common Council members Kirkpatrick, Martin and Smayda should give all citizens of White Plains grave concern regardless of one’s position on the FASNY project.  It brings into question the manner in which our City is being governed.  The outrage is not limited to residents in Gedney Farms alone but has spread throughout the City.

The Board of the Gedney Association is committed to continue the fight which was won last year when the FASNY proposal was rejected. We have already lined up the requisite land use experts, including environmental consultants, traffic engineers, and special environmental counsel. We have been joined by the major neighborhood associations in the south end of the City as well as receiving support from other neighborhoods in other parts of town.

We have been very grateful for the continued support both financial and otherwise by the residents of Gedney Farms.  We need your involvement and support even more now given how the Mayor and aforementioned Council members have completely turned their backs on us who elected them to office and pay the taxes that provide their compensation.