↓
Home Menu ↓
Home→Toast of the Town!→TONY BROOKLYN MEETS STEPHANIE MANHATTAN AND IT’S LOVE ON THE DISCO ROUND. JACOB TISCHLER IS STAYIN ALIVE AND HOT BEYOND TRAVOLTA ALEXANDRA MATTEO THE DANCING QUEEN BURN UP WESTCHESTER BROADWAY THEATRE WITH GLITZY GLAMOUR, IMPOSSIBLE ROMANCE GIVING YOU SATURDAY NIGHT FEVER. CLASS GLAMOUR ARE BACK 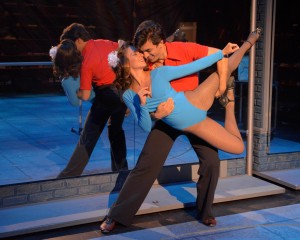 Alexandra Matteo, Uptown Girl, meets an Italian boy from Bay Ridge Tony (Jacob Tischler) and he shows her new steps and she has 100 reasons never to see him again. But of course, she does. All Photos, Courtesy, Westchester Broadway Theatre By John Vecchiola

Hand me down my tuxedo, I’m coming back for more of Westchester Broadway Theatre’s  SATURDAY NIGHT FEVER, the revival of the Broadway film and musical of the 1970s, that in splendid one-surprise-after-another numbers with flawless production of the unique disco beat and hits of the Bee Gee era starts with one of the best overtures to start a New York City musical ever: the surge and swish and honk-honk of NY cabs, the wail of police sirens as  you join Tony Manero ( the ridiculously handsome Jacob Tischler ) and his pals in Bay Ridge Brooklyn USA – 1977—Scott Muni is on the radio, Son of Sam is in the news, and the  underthrob beat of the heart of “Stayin’ Alive” energizes the theatre. Nothing builds excitement more instantly than the real sounds of New Yawk. 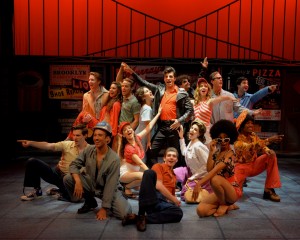 Stayin’ Alive performed by the cast of Saturday Night Fever 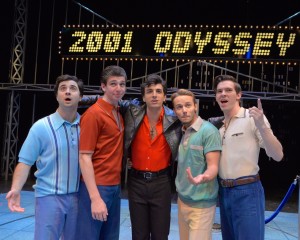 Tony and the gang, teens of the old Bay Ridge, five buddies who  talk Brooklyn, use the Italian slang of those times, posture—in the shadow of the Verrazano Bridge— (How do you fit the Verrazano Bridge on stage, go see Michael Bottari’s and Ronald Case’s Swiss Knife-versatile set and Andrew Gmoser’s city lights and disco dazzle) and Mr. Tischler, whip slender with a pompadour just sweeps away any doubts from memories of John Travolta’s role in the movie—

He stands out and fits in with the cast and he drives home the message of Stayin’ Alive in a deadend neighborhood of deadend jobs. Cut to Tony’s Family home, and he accepts the conflict of his fighting parents, who are so proud of Tony’s brother Frank who is a priest, and want Tony to be more like him.

So then Tony gets ready to go out, strips down to his underwear puts on a paisley shirt, pants combs his hair – I saw myself in Tischler’s  perfect young man’s obsession with hair and body. Now, he’s ready to head to the 2001 Odyssey Disco with the boys who build the disco beat with Boogie Shoes in front of a vintage New York Street front.

The dazzle of the 2001 Odyssey club wows the audience. The styles: bellbottoms, high heeled dancing shoes, the afro, the stylin’ – this was the last dancing era in America. The sequenced lights, the way the lights of Manhattan shimmer behind the Verrazano Bridge. Anybody for a drive to Brooklyn?

Coming down with Saturday Night Fever is like seeing a Dancing With the Stars marathon.  If you like that show you’ll love the choreography and dancing moves in this show to The Hustle, the animated frug-updated, and the high flying lifting and throwing around of the supple, acrobatic dancing ladies and appreciative guys in every number who have this tough job.

Tony loves to dance and it is his escape. At the dance club, love walks in the shape of the cool, sophisticated Manhattan young woman, Stephanie Mangano ( the heart-melter Alexandra Matteo, debuting in “SNF” at Westchester Broadway Theatre). She is an unbeatable romantic 1-2-3 early KO of cute beauty. If her sophistication, poise, and innocence doesn’t get you, than the looks and the heart will.  Stephanie is at the club with one of those older men from Manhattan. You know those older men.

Tony, as he watches The Steph,  is annoyed at the puppy dog adulation of neighborhood pal, Annette (Gianna Yanelli) cramping his style. Ms. Yanelli carries this comic, but slightly sad persona so well we’ll all recognize her. The girl who likes you, but you do not like her.

Tony is drawn to the Manhattan sophisticated young lady  – and Tischler plays this well– not liking the sophisticated Stephanie and her airs, but there is that j’ne sais quoi that we men all recognize – she’s the one. She just leaves you paralyzed. You can’t fight it, not being with her makes you miserable. That’s the way this stormy romance begins.

All the while the young people are doing a hustle to Fifth of Beethoven and then the much-missed WBT frequent performer Michelle Dawson is introduced by the house dj, the campy Wolfman Jack character DJ in the wild plaid fur jacket, Pat McRoberts .

Ms. Dawson in the spotlight, brings down the house with a searing, move-your-feet-sway-your-body-thrust-your-hips-shake-your-booty Disco Inferno (Burn Baby Burn). Ms. Dawson is every bit the Disco Diva – (the Lolita Holloways, the Donna Summerses)—returns  to light up the house with her  caressing contralto doing  Night Fever  and You Should be Dancin at the end of the first act. (Man, they should let the audience  dance in the aisles at this show…please!)

Tony continues to have trouble at home lamenting about being at The Top of Your Game and getting nothing for it. He’s getting no play with his charms on the ice queen, Stephanie either.

He convinces the cool Stephanie to have coffee and in this awkward scene, Fischler flings himself awkwardly, criticizes her preoccupation with famous people and cushy office job, only to be rebuffed by Stephanie, as she walks out and his pride is hung out to dry. In a song most have been through before in relationships of their own Ms. Matteo and Mr. Fischler duet 100 Reasons (not to see each other again). Ladies out there will know that feeling, won’t you? Guys, too. Ahh, the wistfulness, the what-might-have-beens, why-can’t-I-get-this-loser-out-of-my-mind feelings are tied up perfectly in a blue ribbon by this great romantic lead pair.

Jive Talkin where the harsh realities of the working world are highlighted by Tony and the boys,  and Ms.Yannelli, the spurned Annette, wails on the Verazano Bridge,  If Can’t Have You (I don’t want Nobody). Her soprano just rakes the knife through your soul expressing her pain with more emotion poured into it that makes the audience feel the hurt that never heals, ever.

How Deep Is Your Love?  Is how Pauline (Audrey Tesserow) and Bobby (Chris Collins-Pisano) pledge their love at the White Castle.  Never have I heard BeeGees songs so good than they do in this show.

Second  Act turns on the fortunes of the couples. Tony loses his job. He convinces Stephanie to be his dancing partner in a dancing contest. Pauline and Bobby face a pregnancy problem.  The gang has to defend their turf. And the Verrazano Bridge takes a fateful role. Tony finds that Stephanie is not what she professed to be and realizing her mistake she admits What Kind of Fool  (she was). Ms. Matteo puts feelings in song precisely right. Do they make up? Does Tony move on? Clue:  They’re dancing at the end. THE AUDIENCE CLAPPED STEADY WOWED AT THE FINALE–KEEP THOSE GLITTER BALLS TURNING FOREVER! AND WHERE CAN I GET ONE OF THOSE SATIN SPORTJACKETS. STYLIN’ BABY, STYLIN’. MESSRS. BOTTARI AND CASE DID THE COSTUMES FOR THIS SHOW AND THEY DID THEIR RESEARCH!

This is not a show for young children because of some dark twists of the plot, and language, but the songs and dancing are fabulous. 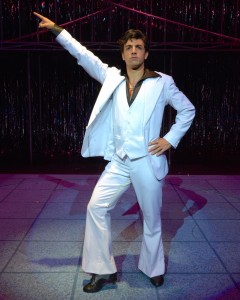 Tell them CitizeNetReporter sent you!