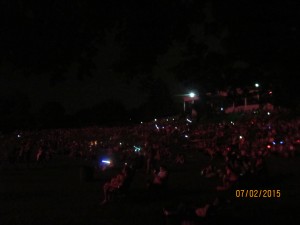 WHITE PLAINS CELEBRATION OF ITS CENTENNIAL YEAR OF ITS FOUNDING AS AN INCORPORATED CITY CULMINATES IN THE ANNUAL FOURTH OF JULY FIREWORKS THAT WILL BE HELD FRIDAY JULY 1 FROM 6 TO 10 PM. THE ABOVE PICTURE IS OF THE CROWD BATHED IN THE GLORIOUS GLOW OF THE FIREWORKS.

The next three weeks highlight the busiest social and entertainment calendar in White Plains that WPCNR can remember since this site began covering the city 16 years ago.

On SATURDAY June 18, a “colonial village” will be recreated in Tibbetts Park which was formerly the Village Green in old White Plains in the 18th century.

During the all afternoon event, the  Declaration of  Independence will be read publicly to the multitudes as it was on July 11, 1776 at the then village court house located nearby (in the vicinity of today’s armory.  The reading will take place a short distance from where the Declaration of Independence was read back in 1776. To read about those events leading up to the first reading, WPCNR refers you to the Croton history website:

On June 21, the city is planning an outdoor concert celebrating the summer solstice, featuring two breakout popular bands from 5:30 to sunset.

These events will be capped by the traditional White Plains fireworks begun in the Delfino administration from 6 to 10 PM on July 1st with the raindate Wednesday, July 6.