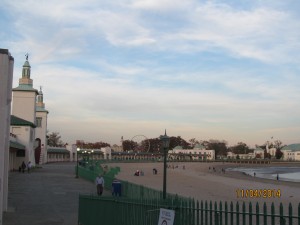 WPCNR COUNTY CLARION-LEDGER. From the Westchester County Department of Communications and the Democratic Caucus May 2, 2016 (Edited) UPDATED (ITALICS) May 3, 2016:

Westchester County Executive Robert P. Astorino’s plan to ensure the financial future of the 1928 vintage amusement park Playland (shown above) through a public-private partnership with Standard Amusements was approved Monday night by the Board of Legislators by a vote of 13-4.

The management agreement was passed separately from individual bonds that authorized funding for several capital projects at Playland including a new fire suppression system, the North Boardwalk and various new rides and attractions.

The approval means that New York-based Standard Amusements will make a $30 million private investment in return for the right to operate the iconic park in Rye.

Standard Amusement’s $30 million investment will go toward revitalizing Playland with new rides and attractions, as well as upgrading food choices, picnic areas, and restaurants and renovating grounds and buildings. Standard Amusements will pay the county $2,250,000 up front; invest $27,750,000 million of its money within five years into refurbishing the park; and make annual payments to the county starting at $300,000 and escalating 2% a year. Once Standard Amusements has recouped its initial investment, the county will participate in a sliding-scale profit sharing agreement.

In return, Standard Amusements will have a management agreement with the county to run the park for 30 years. For its part, the county has agreed  to fund 11 capital projects to rehabilitate the infrastructure at Playland, costing $33 million, including rides, gaming and concession improvements, as well as shoreline rehabilitation.

(Editor’s Note: County Legislator Benjamin Boykin in a detailed analysis of the agreement, wrote the new debt service per year that the county will assume is $2.5 Million, which WPCNR is trying to confirm is added to the $3 Million in debt service the county is currently paying on previous Playland debt. It is unclear if the county is going to consolidate the previous debt service.

In his analysis of the agreement, Mr. Boykin wrote the new debt service would be partially offset by the $300,000 management fee which begins immediately, how much of the total debt service will be offset is not clear.}

“We started with a blank piece of paper for how to save Playland six years ago,” Astorino said. “Now we are taking a historic step forward.  The capital, the operator and the vision are in place to protect both taxpayers and the Dragon Coaster for years to come.”

Astorino said the effort to save Playland was a team effort, and he thanked BOL Chairman Michael Kaplowitz for keeping the deal on track, the members of the BOL who supported the initiative, and Nicholas Singer, a partner of Standard Amusements, for his patience and persistence for sticking with the county until a deal could be successfully concluded.

Singer, a successful investor and native of Westchester, said the deal is designed to preserve the special character of Playland that he remembers as a child.

“To have the opportunity to take a place that meant so much to me throughout my childhood and help restore it to a condition that ensures generations of children to come will be able to enjoy it as I did, is really a dream come true,” Singer said. “I cannot be more thankful to County Executive Astorino and the Westchester Board of Legislators for their vote of confidence and their partnership throughout this process. This is a wonderful day for Westchester.”

Legislator Catherine Parker (D-Rye), joined by Majority Leader Catherine Borgia (D-Ossining), Legislator Alfreda Williams (D-Greenburgh) and Legislator Ken Jenkins (D-Yonkers), voted against the agreement but in favor of separate bond acts, which authorize the largest investment in Playland since it was built.

Legislator Catherine Parker, who represents the Sound Shore communities including Playland stated, “I believe this deal has gone backwards from the one that was crafted previously.  We are spending more money than we were in the last deal and the private operator is reaping more of the benefits of our investment than they were in the last deal.  I believe turning over the keys to one of our county’s most valuable assets without any avenue of accountability is a mistake that will cost us in the long run.  So many county residents have been involved in the process by telling us that this park has been starved for years and they want to see a change.  We’re happy that the public had another opportunity to tell the County Executive that this asset cannot function without the proper investment like he has avoided for years.  I believe the bonds we’ve passed tonight are a strong step in the direction of saving Playland”

Legislator Borgia added, “I have been a supporter of Standard Amusements’ vision for Playland from the beginning of this process several years ago when the County Executive initially selected Sustainable Playland as the operator.  With input from many of our Legislators and members of the public at that time, it ultimately became clear that the County Executive had failed to select a financially viable entity and was unaware of what was required to manage this park successfully.  The County Executive’s track record of starving Playland and failing to negotiate economically beneficial deals for taxpayers is the greatest reason for my concern over this deal despite Standard’s willingness to work with all of the Stakeholders involved.  At this time, I do not believe the county has represented its taxpayers as well as Standard has represented its investors.

Legislator Lyndon Williams (D-Mt. Vernon) added, “Playland is the single largest employer of summer youth in Westchester County.  I wanted to ensure that summer jobs for our young people are protected and that this historic amusement park is modernized and upgraded with new rides and entertainment for families and young people for generations to come.”

“This deal is not perfect but I do believe that paired with the bonds we passed tonight, we have made strides toward saving Playland,” stated Legislator MaryJane Shimsky (D-Hastings-on-Hudson), who Chairs the BoL Infrastructure Committee and oversaw large portions of the negotiation process. “The County Executive’s longtime reluctance to make needed capital investment in Playland is the reason we need a public-private partnership.  By contractually obligating the County Executive to make these investments, I believe we have given Playland the opportunity to provide enjoyment to families for many years to come.”