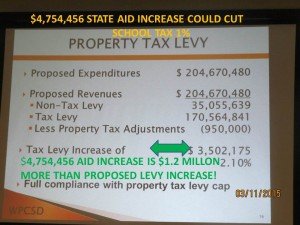 It was back to school in White Plains, New York USA  Monday and the White Plains Board of Education has a pleasant problem. 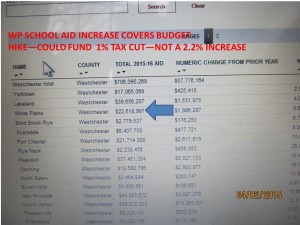 This could mean that the school district could keep the tax rate where it was last year ($600.22/$1,000  if the school aid increase is not dictated by the state to be spent in specific ways.

I asked Fred Seiler, Assistant Superintendent for Business, if the $4,754,497 windfall in school aid comes with strings. No matter how you slice it this is found money, since you can keep the budget where it is, and still fund all they proposed to do (most notably 15 new positions), without raising taxes a penny, if they choose to do that.

It should be noted too that if the district earmarks the $4,754,497 for new position hires, infrastructure, etc., it may not be available next year, and any new hires made with that money would have to be funded in the 2016-2017 budget.

“I have begun to review the state aid data. The superintendent and I will prepare a recommendation for Board of Education review and action at the Board meeting on April 13th.”