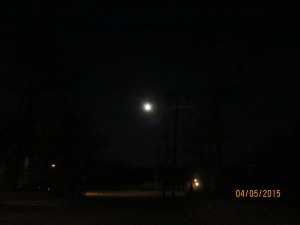 I walked out before dawn had broken on the eastern horizon. The full moon was still in the western sky as sunrise approached. 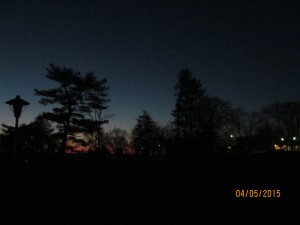 Walking north towards the Easter Sunday Service that was to begin 6:10 Easter morning, the first harbingers of dawn were soft chirping of birds high in the trees.

Approaching the First Baptist Church the very light  green-blue flash of dawn broke across the eastern curvature of the Earth. It happens every morning, a sight that always holds the hope of endless promise for a new day every day. For every person, of every faith. 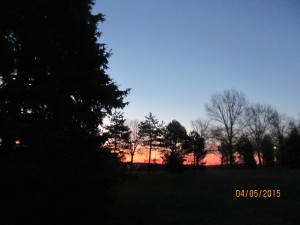 Emboldened, the arms of dawn first light extend themselves, embracing earth, encircling arms of orange-red-yellow-every color chasing darkness caressing  beloved Earth with glow of promise, discovery, renewal – a light soft yet growing more intense and diffuse the very light green turns to light blue with warming orange glow beneath. All dawns are new and different each day, but none more revered than the dawn of an Easter Sunday.

The arms of dawn comfort the beleaguered the bereft, the believer, the skeptic alike. Announcing the Sun is coming.

Twenty persons were gathered for the Easter Sunday Service on the old J.C. Penny estate in White Plains, now the grounds of the First Baptist Church of White Plains & Iglesia Mision Bautista.There was linger of winter in this very late Spring on the grounds and it was 33 degrees.

Pastor Tim Dalton began with this statement: “Faith is believing in spite of the evidence and watching the evidence change. 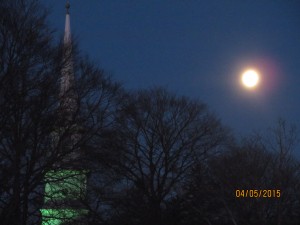 The evocative hymn was sung with reverent wistfulness and I felt a feeling of wonder and warmth against the crisp morning… the sky to the West already turning blue with the dawn and the full moon on the wane. 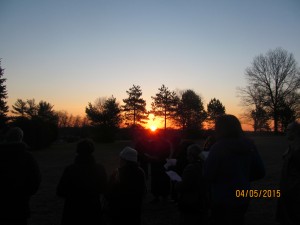 After a solemn opening prayer delivered by the Pastor  spoken as if he was one of the flock, saying what each of us came and probably felt on this morning; what the sunrise today represented; what the resurrection of Jesus of Nazereth signified, as the dawn rose glowing in the East. The  confluence of the dawn  presented an infusion of essense into the souls arriving to mark this special dawn.

A litany followed, the significance of the belief in the resurrection was articulated by response in the last three lines:

PEOPLE: TAKE HOLD OF YOUR COURAGE; RELEASE YOUR FEARS,

Pastor: Unleash the burined song within your souls; look death straight in the eye; walk on with confidence.

PEOPLE: For Christ the Lord is risen! Christ is risen for you! 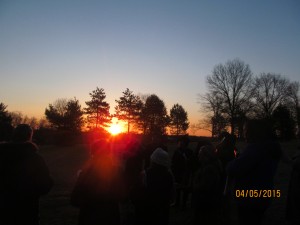 A guitarist and three singers sang a beautiful hymn in Spanish. Hearing the eloquence of these versus in the haunting melody of guitar and the romance language conveyed the sweetness of the day:

Pastor Dalton  read John 20:1-18 which had the eyewitness impact of  the event that is recalled every year – and in the beginning for to recall the event was to invite imprisonment and death. Here are some of the words of the report of the Apostle John.

As Pastor Tim read the scripture from  about 20 minutes to 7, the disk of the rising sun began to rise slowly in a blazing halo of brilliant yellow on the dark hills to the east:

Early on the first day of the week, while it was still dark, Mary Magdalene came to the tomb and saw that the stone had been removed from the tomb. So she ran and went to Simon Peter and the other disciple, the one whom Jesus loved, and said to them, “They have taken the Lord out of the tomb, and we do not know where they have laid him.”

He saw the linen wrappings lying there, and the cloth that had been on Jesus’ head, not lying with the linen wrappings but rolled up in a place by itself. Then the other disciple, who reached the tomb first, also went in, and he saw and believed; for as yet they did not understand the scripture, that he must rise from the dead.

But Mary  (Magdalene) stood weeping outside the tomb. As she wept, she bent over to look into the tomb; and she saw two angels in white, sitting where the body of Jesus had been lying, one at the head and the other at the feet.

They said to her, “Woman why are you weeping?” She said to them, “They have taken away my Lord, and I do not know where they have laid him.”

When she had said this, she turned around and saw Jesus standing there, but she did not know it was Jesus. Jesus said to her, “Woman why are you weeping? Who are you looking for?” Supposing him to be the gardener she said to him, “Sir, if you have carried him away, tell me where you have laid him, and I will take him away.”

Jesus said to her, “Do not hold on to me, because I have not yet ascended to the Father. But go to my brothers and say to them, “I am ascending to my Father and your Father, to my God and your God.”

Mary Magalene went and announced to the disciples, “I have seen the Lord” and she told them that he had said these things to her. 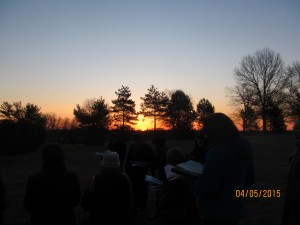 The passages were read Spanish, and as the sun rose brighter than an object you see  just above the horizon, the singers and guitarist performed Gloria, Gloria Aleluya that featured this verse of hope:

The Sun disc fully risen, the Pastor asked the souls present to look and listen to the sounds and enjoy the sights of God’s creations around them.  Chirping of birds  was heard. Two seagulls flew west overhead with the dawn. Even a rabbit was seen to observe from some distance away. (Can you spot the rabbit below?) 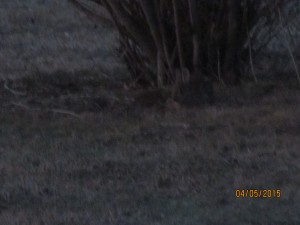 The  Group joined for a final hymn, Lord of the Dance, a song written by the Shaker community in the 19th century,  a graphic, but joyous song and autobiography of Jesus of Nazareth , a fitting coda on the significance of this morning. I quote the last three verses:

I danced on the Sabbath when I cured the lame,

The holy people said it was a shame;

And they left me there on a cross to die.

I danced on a Friday and the sky turned black;

it’s hard to dance with the devil on your back;

they buried my body and they thought I’d gone,

but I am the dance and I still go on.

They cut me down and I leapt up high,

I am the life that’ll never never die;

I am the Lord of the Dance, said he.

Dance, then, wherever you may be;

I am the Lord of the Dance, said he.

And I’ll lead you all wherever you may be

And I’ll lead you all in the dance, said he.

Pastor Duncan closed the sunrise ceremony encouraging all advising that the message of this day is to live lives of mercy, of caring, of tolerance, and working towards the good.