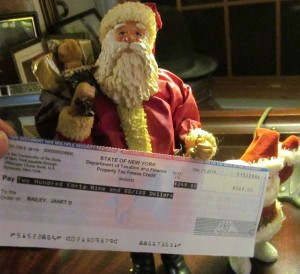 The long-promised, much-ballyhooed, hugely self-congratulatory public relations effort of the Cuomo administration and our state legislators in New York arrived, (as predicted  facetiously by White Plains TV’s White Plains Week on this week’s show),  arrived in the mail in White Plains on The Day Before Christmas. Some eight months after it was voted. It had been reported to WPCNR by  the Department of Taxation and Finance, that the checks had been going out “in stages” last month.

Well, check tsunami washed up on White Plains in Wednesday’s mail just in time for Christmas holiday cheer. We had expected it would arrive just before election day for maximum election impact. But no.

For most New Yorkers earning under $500,000 a year, the most-longed-for, eagerly-awaited check of year finally arrived Wednesday in White Plains.

The question is whether we now have to declare this check as income when we file our 2014 taxes.

The refund was passed as part of the 2014-15 New York State budget last April as a state effort at property tax relief.

Perhaps we can increase the amount next year?

For once, “the check really was in the mail.”