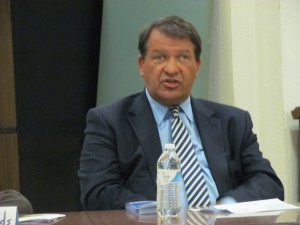 Every form of government known to mankind has an executive.

There are monarchies, passed down from king to crown prince (and occasionally, if rarely, to a princess who becomes ruling queen).

There are religious fiefdoms, ruled by ayatollahs or imams.

There are the premiers, the prime ministers, the presidents and their local cousins: governors, county executives and mayors. Sometimes, the Army general leads a military takeover and then leads the country; sometimes, it’s political change that brings in Communism and the secretary of the Communist Party to rule.

Whatever they may be called, there are always “kings” – individuals who exert the central power of the entity, whether through election, or armaments, by fear or faith or popular mandate.

There are not always legislatures.

It is a development in Western societies that ensure the men and women of the jurisdiction should elect localized representatives to make decisions in some balance with the executive. The Parliaments, Knessets, or Village Board of Trustees, exert the power to create laws, levy taxes, authorize public spending – with executive approval. In fact, there are three core duties of any legislature: 1) pass laws and budgets; 2) provide constituent services; 3) serve as a check and balance on the executive.

Legislatures are, by definition, arenas where issues are debated and power is diffused by geography, and perhaps, by demography, as well as by political affiliation. People come from all parts of the nation, or the state, or the county, town or village to grapple with difficult issues in a difficult environment where no one legislator wields ultimate authority. Legislatures are meant to be slow, deliberative bodies. This is the arena where the disagreements of the society are on display, each with supporters advocating on their behalf. And lacking one singular voice, legislatures move slowly to change, unless there is a strong public climate for dramatic change.

Executives can move with speed; they have no one they must share power with within the executive chambers. They can be the Colossus of Rhodes, standing astride the entity, granting beneficence and issuing punishments as they see fit.

They make the “big” decisions: from deciding war/peace to presenting budgets that either fund or starve for funds different groups. The individual legislator is small-time: accessible to the average person; working on a scale sufficient to connect with a smaller electorate on a more personal basis.

The executive often has greater resources at fingertip: experts on policy and people to implement decisions; a large budget; the ability to attract media attention nearly instantly. The legislator operates with a slim support team at best, a handful of people committed to that individual legislator, not infrequently overworked and underpaid.

The process to become the executive is always a harder road than the one to win a legislative seat; the personality, quirks, preferences of the executive can be
blown up to a bigger-than-life persona, in some cases, in contests that focus on all the strengths and weaknesses of the executive candidate. Legislators often toil in relative anonymity, until a crisis breaks. The political resources organized to become president or governor can provide the winner with the resources to focus energies towards their preferred policies.

Most legislators long for the central attention given to the executive; sometimes, an executive can long for the faceless anonymity of the legislator. The legislator may not need to appear in person in the middle of the night of a tragedy or crisis when a police officer is shot, or when a sewer pipe breaks  and spews garbage into the water. The executive must be there to show concern and leadership..

Everyone knows that the legislature – with more people, bubbling energy, ambitious men and women – can thwart the will of the best executive; and similarly, an individual legislator’s power base or agenda can die a swift death in the executive’s powerful hands.

And we need ‘em both.

One must check the other; the other must balance the former. We don’t want tyranny and we don’t want mob-ocracy. We want a productive balancing of powers and duties, with the most important thing being effective governance. We fall in love with the popular executive; we deeply hate the unpopular one. The faceless members of the legislature, through good years and bad, may hardly register a blip on the screen even after years of holding office.

If our American democracy is to thrive in the years to come, it will take the proper harnessing of energy and enthusiasm to the skills of deliberation with grassroots sensibilities. It will take presidents and Congress members, governors and assemblymen and mayors and councilmen to acknowledge each other and their respective political needs and agendas if we are to build the trust that is so essential to good public policy. The self-directedness that is prominent in every person who places their name on a public ballot must recognize that for our country to survive we must learn to cooperate and respect each other. Or else, we will all fail together.

We need Kings…and we need Parliaments, too.