I watched the Brian Williams interview with Edward Snowden Wednesday evening. I saw an interview that did not ask some basics: 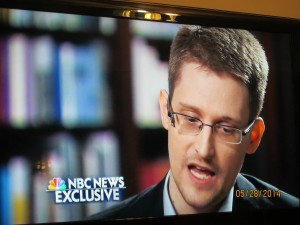 Now to be sure, a lot of those questions maybe Snowden did not want to talk about, or could not. Maybe they were left on the cutting room floor. Of course, maybe they are just dumb questions. But the dumb questions are sometimes the ones that get right to the point. The above areas go to the heart of the question: is the NSA competent? Can they protect their own information (no. We now know that.)? How is the NSA program used? Is it effective?

What intrigues me more is this developing into a Secret Police?:

Has NSA info at all shared on “a who would like to know basis” on child pornography, drug trafficking, psychiatric and medical records, bank money laundering, insider trading, political bribery,  prescription and illicit drug purchases, extramarital affairs, dating websites, pornographic websites, chatroom behavior, purchases with local political parties and law enforcement? If the NSA did share with authorities and political allies of the administration, that could be very alarming to the average citizen. Such information can be used to target political personalities and business and activist personalities who are inconvenient and a threat to political and lobbyist policies. That question was not asked.

This interview was all about Mr. Snowden’s feelings, motivations and justifications and missed the big picture that Snowden to his credit tried to bring out: You have lots of Big Brothers watching you in ways you have no idea. At times Mr. Williams appeared naïve and did not go down open highways of inquiry that quite frankly made my mouth water.

When are news reporters going to start delving for facts again – and not acting like sympathetic behavior therapists with their questioning. I have had it up to here with the “How do you feel questions.”

I felt Snowden came off very well in the interview and made some sympathetic, heart-string-pulling points. Snowden’s  signature line, Sometimes  to do what is right, you have to break the law, coming  at the end of the hour program was perfect.

I felt with some answers, NBC cut off Mr. Snowden in the editing, just when he was saying something really juicy, and attempting to expound on the spider tentacles the American Secret Police are extending into our every day behavior. This was particularly frustrating when Snowden talked about the eavesdropping computer that can tap into text messages and cellphone communications. He was starting to talk about that when the volume faded out and they went to break.

Mr. Snowden got his point across about how the surveillance practices of  the government had gotten very aggressive in his opinion and he felt it was wrong and against all this country stood for, and he wanted to expose it. This was his strong message. Snowden indicated he felt practices he observed were not in the best interests of the country and not the way the country he loved should behave toward its citizens.

The interview got lost in the question of whether he was a traitor or a patriot, and his motivation to expose so much information.  This labeling is beside the point. And misses the big story unfolding before the press’s collective eyes.

You have to be born yesterday not to realize when our feckless congress passed the Patriot Act that they were opening a new era of constitutionally compromising practices to combat terrorism. This was the worst thing congress could have done.

However, how efficient was U.S. Intelligence use of information before 9/11? Government agencies ignored the 9/11 perpetrators who attended flight school in Florida.

Intelligence has to get better now.

We have entered the new era of the substantially unstable Middle East, and the soon-to-be-considerably-more-volatile India, which will be a primary target of the Al Quaeda terrorism and subversion.  You don’t need the U.S. Intelligence establishment to tell you that.

What we do need to do is develop more competence in government:  This week, we find surprise the VA Hospitals can’t serve their veteran patients and cover it up; we learn the military cannot throw out morally corrupt officers; in the last five years we know the SEC ignores allegations of widespread fraud by investment firms and banks;  the congress wants to lower food standards in schools;  we have an Education Department that pays a national firm to develop achievement tests that are so amateurly written 75% of NY students can’t pass them,  and locally the government doesn’t inform the public or the press what it is doing.

No wonder the press has to leak.

So much incompetence to mop up.

And it just keeps on coming.