↓
Home Menu ↓
Home→Connors Comes Back Again. WP Board of Education to Bring Interim Superintendent Back for Year 2 — No Possible Successor to Fill Shoes at this time. 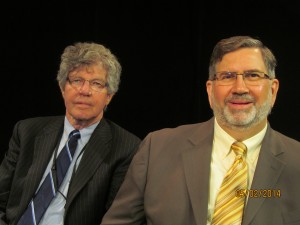 WPCNR SCHOOL DAYS. From Michele Schoenfeld, Clerk to the White Plains Board of Education. May 8, 2014:

The White Plains Board of Education plans to negotiate an extension of the contract with Timothy P. Connors as Interim Superintendent of Schools for the year beginning July 1, 2014.

As first reported last week by WPCNR news, Mr. Connors first alluded to his willingness to come back for a second year as Interim Superintendent of Schools to John Bailey and Peter Katz White Plains Television’s PEOPLE TO BE HEARD which may be seen at www.whiteplainsweek.com. White Plains Week was first to report this possibility last Friday evening.

Authorization to do so will be placed on the agenda for approval at the Regular Board Meeting on May 12th.

After a nationwide search for a new superintendent and an extended interview process, the Board concluded that the best option for the district at this time is to ask Mr. Connors to stay on for an additional year.  He returned to White Plains last year as Interim Superintendent, after havingn served a seven-year term as Superintendent in the district, from 2002 through 2009.

Board President Rosemarie Eller said, “We are confident that we have made the proper choice at this time for the students, staff  and community.  Mr. Connors will ensure continuity and stability as he continues to move the district forward.  The search for a permanent replacement will begin in the fall.”

Mr. Connors had a distinguished career in public school administration before coming to White Plains in 2002.  He had been Superintendent in Danbury, CT, Bloomington, MN, and Woonsocket, RI.  He did his undergraduate work at Springfield College in Massachusetts and has a Master’s Degree and a Certificate of Advanced Studies from Harvard.  He also participated in the Urban Superintendents Program at Harvard.