↓
Home Menu ↓
Home→Set em up, Joe: Give me One for my Baby and One more for the Road of that Great White Plains Water! 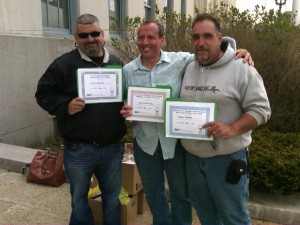 *In the attached photo are the 1st, 2nd and 3rd place water districts from left to right as follows – City of White Plains, City of Mount Vernon & Village of Scarsdale.

WPCNR MAIN STREET JOURNAL. From the Westchester County Department of Communications. May 7, 2014:

The people’s choice for best-tasting water in Westchester goes to the City of White Plains. The Westchester County Department of Health held its annual water tasting contest Tuesday in White Plains, where 138 participants sampled water from 10 of the county’s water suppliers and gave bragging rights to White Plains.

The blind taste test was held in recognition of National Drinking Water Week outside the Michaelian Office Building on Martine Avenue from 10 a.m. to 2:30 p.m.

The City of White Plains, labeled A in the blind taste test, received 80 points. The runner-up was the City of Mount Vernon, labeled D, with 72 points. Village of Scarsdale, labeled C, came in third, with 64 points.

“We’re all winners, because Westchester’s drinking water is excellent,” said County Executive Robert P. Astorino. “Thank you to the professionals who work to assure the water not only tastes good, but is good for you.”

The contest was held to promote the excellent quality of Westchester tap water and to highlight the role of the county health department in assuring drinking water quality.

The experts say a good glass of water should be clean, crisp, clear and cool. The county’s health department samples the waters routinely, and they meet all quality standards.

The participants were labeled as follows in the blind taste test today:

A – City of White Plains