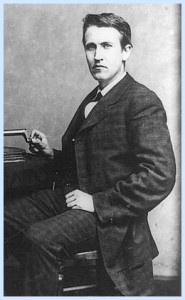 He was born today in Milan Ohio in 1847, the seventh child. He was homeschooled by his mother, Nancy Matthews Elliot. His father was Samuel Ogden Edison, Jr.

Thomas Edison was born on February 11, 1847 in Milan, Ohio.  His parents were Samuel Ogden Edison, Jr. and Nancy Matthews Elliott. Thomas was their seventh child. He started school late due to a childhood illness and was thrown out of school three months after he started. Teachers said his mind wandered, and his teacher called him “addled.”

His mother home-schooled him and taught him to read and encouraged him to experiment.

He was partially deaf and his first job was as a telegraph operator after he saved the child of a railroad official from being hit by a train. J.U. Mackenzie of Mount Clemens, Michigan the father of the child made Edison an apprentice and taught him to operate a telegraph.

Edison drifted to various railroad towns as a telegrapher, eventually coming to the metropolitan area where he created his first invention, an improved stock ticker, for which he was paid $40,000

On December 25, 1871, he married Mary Stilwell, and they had three children, Marion Estelle Edison, Thomas Alva Edison, Jr., and William Leslie Edison. His wife Mary died in 1884. On February 24, 1886, he married 19 year old Mina Miller. They had an additional three children, Madeleine Edison, Charles Edison (who took over the company upon his father’s death) and Theodore Edison.

Edison, who made the famous quote, “genius is 99% perspiration; 1% inspiration” eventually invented the light bulb: